This post was published 14 years 4 months 22 days ago which may make its content inapplicable to the current Islanders roster and/or team news. This site is not responsible for any misunderstanding.
TweetLikeShareLinkedIn

This has been an interesting story for the past few weeks, and it’s nice to see it ended on a positive note for a change. 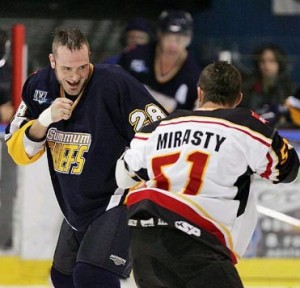 I had heard rumblings of what some would consider a “prize fighter” type enforcer named Brandon Sugden being invited to Islanders camp for a try-out. I had never really heard about this guy before, but once I did some digging I saw that he was notorious. Not only is he a great enforcer, but he had gotten himself into a bit of trouble and received a lifetime ECHL ban as a result. All the negatives aside, Chris Botta the ex-veep of media relations for the Islanders picked up on the story and provided information that he got directly from Brandon himself (look at that man blog BTW – who thought he would actually stop?). Not only was he allowing Brandon to have a voice, but Chris set the wheels in motion for something bigger.

To attend the Islanders’ camp, Sugden needed to be cleared by all 30 NHL teams because he had officially “retired” from pro hockey in 2006. League rules state that if you retire, you must sit out one year before you can be reinstated. The rule makes sense because you could have guys retiring all over the place the moment they don’t like their current fates.

Wouldn’t you know it, 4 teams did not vote in favor to bring Brandon back – Botta would learn the name of one team blocking Sugden’s return, take a guess who – the NY Rangers. For those worried about the character of Brandon Sugden – Botta has him quoted saying the following:

“Look, I made many mistakes when I was a kid,” the 30-year old Sugden said. “I was a rebellious idiot and got banned from a league. But I worked hard to turn my life around, which might not have happened if I hadn’t met my wife. I have been off drugs and alcohol for seven years. I have been a good person, a good example, for a long time. When I was in Syracuse I used to speak in packed auditoriums in front of more than 500 people about the wrong way and the right way to live. I did everything on my own time and I was proud when I was named Man of the Year for the Crunch.

“This is killing me. I want this chance – for me, for my dad, for a lot of reasons. I can only hope I get the chance to plead my case.”

Not to mention this key piece of information:

He’s also willing to put his money where his heart is. When I spoke with Sugden Tuesday night, he made a promise that he will donate 1/3 of any money he makes from playing in the NHL this season to charity. He would like it to go to the Princess Margaret Hospital in Ontario, where his father receives treatment for cancer.

If donating part of whatever salary he makes in the NHL to charity doesn’t speak volumes for a person character and how he is a changed man, I don’t know what else he could do to prove otherwise. That is a noble gesture and one that is sure to open some eyes!

The reference to his father is also a touching one, as his father is battling terminal cancer and he wanted his dad to have a chance to see him play in the NHL – one that appeared to be slipping away. But wait, not so fast! I return from a weekend away upstate only to read the following news brief straight from Botta:

The groundswell of support for Brandon Sugden has made an impact. NHL No. 2 Bill Daly called Sugden yesterday, told him he was aware of his story and that he’d contact the teams blocking him from attending Islanders camp.

This was an update on Saturday morning, by 9pm Botta received a voice mail from an excited Sugden that played out as follows:

At 9:15 pm I listened to a voicemail message on my cell that I probably will never forget. It was Brandon Sugden, shaking and ecstatic.

“Hey Chris. I just got a call from Bill Daly. He talked to the other four teams. They’re giving me the green light. Mr. Daly is clearing me. I’m coming to Islanders training camp. I hoped to get you on the phone, but for now – thank you. I’m heading back to the rink tonight for some more skating.”

The dream of Brandon Sugden and his dad lives on.

Chris Botta is someone no longer under the employ of the New York Islanders – he reached out in support of a player whom needed a second chance. He made phone calls, gave this player a voice and may even lead to a stint with an NHL club. Blogs are a powerful tool, and it helps when you remain connected to the sport and team you love – for sure. It just goes to show the type of character Chris Botta is, he just jump started Brandon Sugden’s emotions and got the attention of the entire league and the NHL offices.

Well played sir, that was the classiest move I have seen in a long time. Let’s see what Brandon can do for the New York Islanders – and well, TO the New York Rangers.