This post was published 13 years 6 months 3 days ago which may make its content inapplicable to the current Islanders roster and/or team news. This site is not responsible for any misunderstanding.
TweetLikeShareLinkedIn 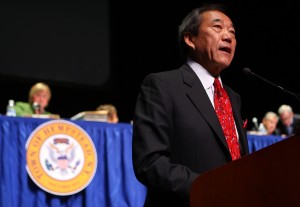 Not even hours after the show of support for his heralded Lighthouse Project, Islanders owner Charles Wang released the following in a press release thanking everyone who came out in a show of support today:

“I would like to thank everyone that turned out to support and comment on the project. My partner Scott Rechler and I were so pleased to see the overwhelming turnout at both the rally and the public hearing. The Lighthouse project is something which has mobilized Long Islanders to get behind a future for their families and future generations. We are looking forward to continuing to work with the community, Town of Hempstead and Nassau County as the Lighthouse project moves forward. The Lighthouse is a catalyst to kick start Long Island’s economy, and we need it now.”

As someone who covers the team, and was in house to witness this large step for the Lighthouse – allow me to THANK YOU Charles; be it not for your dedication to New York, Long Island and especially the New York Islanders, the franchise would have ceased to exist as we know it many, many years ago. For seven years you have worked day and night on getting this project to become reality. Today you got another step closer to making that happen.

Again, thank you for sticking this out.