This post was published 13 years 1 month 14 days ago which may make its content inapplicable to the current Islanders roster and/or team news. This site is not responsible for any misunderstanding.
TweetLikeShareLinkedIn 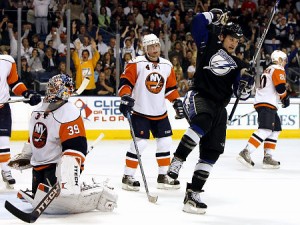 As I prepare the live blog for the live blog tonight, I just wanted to get a few things out of the way. First and foremost – the site experienced some downtime on Saturday afternoon. My apologies if you tried to reach the site and found a blank white page instead of the usual content. I was doing some routine stuff and like all routine tasks – something broke and took me a bit to figure it out. We are good to go now though.

I also, like many of the other local Islanders fans, chose not to make Saturday nights game against the Montreal Canadiens due to the blizzard conditions. I was able to watch from home, but it appears my decision to stay home was a good one for many reasons.

Tonight is a differrent story as the Islanders face off with the Tampa Bay Lightning.

Tampa is another one of those Eastern Conference teams log-jammed in the middle of the pack, and tied with the Islanders for 33 points. Players to look out for tonight on the Lightning squad: Vincent Lecavalier, Ryan Malone, Martin St. Louis and Steven Stamkos as they each have 30 points or over. Not one player for the Islanders has 30 points, the three closest players are Kyle Okposo (22), Matt Moulson (26) and John Tavares (27).

The Islanders were shutout the last time these teams met earlier this month on their road trip – by a score of 4-0, for the sake of all things Islanders – let’s hope that a shutout against is not the case tonight.

As I type this, once again the Islanders are skating to the pre-game warmup to Jay-Z’s Interlude off of The Black Album, which happens to be one of this writers favorite songs.

The Islanders have simple goals and simple tasks – which, when executed enable them to dictate flow, breakouts, and forecheck. Some of which include speed through the neutral zone, short quick passes, a good breakout, puck support and their sometimes amazing forecheck. It’s up to them to stem the tide of their recent home losing streak – so let’s see which team comes out and owns the first period.

7:08pm Islanders do not control the opening draw (I should really look back through my posts and tally the results) and Tampa is controlling the puck deep in the offensive zone.
7:12pm Nothing really going here, Tampa was just whistled for a handpass that started in the neutral zone and batted into the defensive zone. I call it a back court handpass….
7:13pm Stamkos dipsy doodles past the Islanders defense with a step and makes a strong move – Roloson fought him off but Stamkos beat him – although he didn’t beat the post thankfully.
7:16pm Bailey continues to be in position as a winger – getting his second shot of the period which forced Smith to cover it to stop play.
7:21pm After a very strange series of bounces, Tampa thought they scored and the play continued. It is being reviewed now – looks inconclusive from my end….
7:22pm NO GOAL, puck deemed to have never crossed the line
7:23pm Tavares with too many moves going to the net, doesn’t register a shot. He needs to make a faster decision with the puck.
7:27pm Islanders going on the power play – Neilsen was hauled down
7:30pm Even strength, I think the Islanders managed two or three shots on the power play. Okposo continues to struggle with the puck, losing control three or four times. Maybe he should change his sticks up?
7:37pm Tampa takes another penalty, Islanders are 0/1 tonight on the power play – let’s see what they have this time around.
7:39pm Hillen works the halfwall, dishes to Bailey who finds Hunter cruising the slot for an easy tip in! Islanders power play goal, they take a 1-0 lead

MacDonald took a late first period delay of game penalty, Islanders walk into the room up 1-0 thanks to a power play goal for the first time in 19 or 20 chances. They need to come out and kill the remainer of the penalty and build on their lead. I like what I have seen so far, they are making smart choices with and without the puck and are limiting Tampa’s chances.

8:01pm Messy opening draw where both teams fought for control. The Lightning eventually ended up controlling the puck near the inside of the Islanders blue line
8:03pm Islanders could have had a breakaway, Tampa holds Comeau and we are 4 on 4 for 20 seconds
8:04pm Abbreviated Islanders power play chance. One minute left. 1/2 so far a man up.
8:06pm Smith makes a save on a relatively routine shot from the high slot and we are even strength.
8:09pm Some good pressure down low, from Hunter (his shot hit Smith in the head), MacDonald from the point (hit the glove and outside of the post) and from Sim whom tipped Gervais shot.
8:10pm Tavares just fed a streaking Moulson and Smith came up big again for Tampa.
8:11pm All it takes is on, shot that is – Stamkos just notched his 21st of the season to tie the game at 1
8:16pm Islanders odd man rush broken up by a timely stick check by Tampa. Comeau lost control of the puck and it went out of the offensive zone.
8:17pm No call on a boarding call behind the net – Okposo just got his face planted into the glass.
8:19pm Moulson deflects a Witt point shot that missed by a narrow margin. They need to get those shots on and crash the net for rebounds.
8:24pm Park beats Smith upstairs, but it sailed over the crossbar. Jon Sim comes from behind in a wrap around and they hack at the rebound under a fallen Smith.
8:26pm Roloson knocked down in front and play stops.
8:29pm Nate Thompson gives the Islanders a 2-1 lead off a beautiful pass from Okposo
8:33pm Hedman delay of game – Islanders power play
8:34pm Tavares gets called for a trip, yet he was trying to play the puck while sprawled on the ice. 4 on 4
8:37pm Penalty over, Tampa ties it with 18.6 remaining in the period. Almost made it out up a goal like the first period.

End of the second period

8:56pm For once in I don’t know how long, Isles control the opening draw.
8:58pm Moulson bats a puck out of mid-air but it missed the net and would’ve been a high stick. Hillen just shot the puck over the glass, delay of game penalty = Tampa power play.
9:00pm Roloson makes a save on the first Tampa shot, kicks out a rebound and the score is now 3-2 Tampa
9:08pm Rare Islanders pressure in Tampa’s zone this period.
9:09pm Tampa’s passes short and crisp – Islanders passes long and not so crisp
9:10pm Fourth delay of game penalty tonight, Islanders power play
9:12pm Islanders were in the offensive zone pretty much all 2 minutes of that man advantage, but they couldn’t sneak on in.
9:16pm Sutton called for interference, tic-tac-toe-goal Tampa has a two goal lead
9:26pm Joensuu was crosschecked, PP Islanders who are like 1/6 tonight
9:30pm Nothing going on the power play and the Islanders lose by a score of 4-2