This post was published 11 years 9 months 5 days ago which may make its content inapplicable to the current Islanders roster and/or team news. This site is not responsible for any misunderstanding.
TweetLikeShareLinkedIn 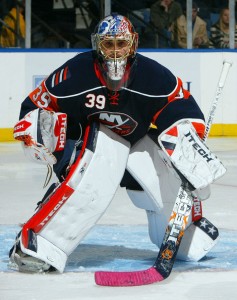 Good evening everyone, checking in live as always from Nassau Coliseum in Section 201 from the New York Islanders Blog Box. Tonight is a special night, as it marks Rick DiPietro’s first home appearance in more than a year and his second start of the season. Check out what DiPietro said before tonight’s game right from the source and iTV.

Look for the Islanders to come out and try to take the lead early on Ryan Miller. Also look for players such as Josh Bailey, Mark Streit, Kyle Okposo and Rob Schremp to extend their point streaks and remain hot for their team. It’s certainly exciting when the team collectively is playing well, it’s even more exciting when they can take a win like the 6-0 romp over Detroit earlier in the week and build upon it with continued hard work.

Should be a great game tonight.

Just shot some video of DiPietro being introduced here tonight, I will have it up when I can.

7:11pm Islanders win the opening draw and go right to Miller, who makes a save. DiPietro just made his first save at home!
7:13pm DiPietro has four saves already, Islanders have iced the puck.
7:14pm Frans Nielsen with a strong move and gets in for a shot that misses the net.
7:19pm Islanders move in two on one, Okposo makes the initial shot, Tavares crashes the net and he has his first goal in a LONNNGGGG time (10 games). 1-0 Islanders Assists to Okposo and Sutton
7:24pm Islanders came EXTREMELY close to scoring to making it 2-0 there, great pressure in front had Miller scrambling to find the loose puck. Islanders had several attempts and wound up with the rebound and then lost control of the puck so it skipped out of the zone.
7:27pm Islanders going to be a man up here, as Buffalo has taken a hooking penalty.
7:34pm Nothing happened on the power play, some big hits here late in the first – getting physical.
7:37pm Buffalo takes another penalty, tripping this time. Islanders are 0/1 on the man advantage tonight, let’s see if they can even up their chances.
7:42pm Islanders did not manage to score on that power play, in fact Buffalo had more scoring chances.

End of the first period

Islanders came out kind of slow, DiPietro was forced to stop six early shots and seemed good positionally. If anything, it allowed him to get in the game earlier than he thought. They managed to pick up the pace and have a good forecheck and backcheck, this lead to Buffalo taking two separate penalties. Unfortunately, the Islanders couldn’t capitalize on those chances, but they are still ahead 1-0 going into the second period.

I’d like them to step up their intensity a bit and match the physical play of the Sabres, but I gues we cannot ask for everything.

8:01pm Sabres control the opening draw this frame and move it up ice into the Islanders end.
8:02pm Islanders on the power play, Buffalo off for cross checking
8:03pm Weight with a point shot that was deflected and it skipped wide, Moulson with a chance out in front off a power move to the slot and it’s deflected out of play.
8:07pm Islanders are now 0/3 on the power play tonight.
8:17pm Islanders going on their fourth power play, let’s see if they can capitalize. Hecht for a slash.
8:20pm Islanders are now 0/4 – Nielsen missed a gimme on a nice feed from Moulson. He put his hands on his head and gazed up to the rafters.
8:23pm Islanders going to be down a man here, Freddy Meyer for a cross check.
8:25pm DiPietro makes a big stop for his Islanders, through traffic. Big Andy Sutton was right there to make sure to keep the crease clear as well.
8:27pm Islanders kill off the penalty, and Meyer finds the puck coming out of the box and does his best to keep it down low and forced Buffalo to ice the puck.
8:29pm Islanders take a 2-0 lead on a goal by Bergenheim, assists go to MacDonald and Streit
8:30pm And Buffalo comes right back off the next face off and makes it 2-1
8:34pm Buffalo turnover, Shremp backhand passes over to a streaking Comeau who shot it right into Miller

Finally uploaded the video I took during the introductions:

8:54pm Islanders fail to really control the draw after “winning” the puck back, Buffalo took possession in the Islanders zone.
8:56pm Sutton lined up a huge hit on Kaleta but missed most of it, almost killed him.
9:03pm Big scuffle behind Ryan Miller, coincidental penalties, Tallinder for Roughing and Streit for unsportmanlike conduct. Four on four.
9:06pm Park appeared to have scored, but it was waived off due to incidental contact with Miller. Replay on the scoreboard showed otherwise.
9:09pm Marching Band in attendance tonight, riles up the crowd by starting a chant that shall not be repeated here.
9:12pm That non goal now a factor, as the Sabres have come back to tie the game on a puck that snuck in behind DiPietro. 2-2
9:20pm I just realized nothing much has happened worth writing about. Yikes.
9:23pm Sutton with a big hit on Grier.

For the I’d say, 27th time this season, the Islanders are headed to overtime!

9:34pm Islanders with good pressure on Miller, Okposo with a few chances
9:39pm With :15 seconds remaining, Islanders called for too many men on the ice….

And we are going to the shootout.

Islanders WIN, DiPietro with his first win of the season!