This post was published 11 years 9 months ago which may make its content inapplicable to the current Islanders roster and/or team news. This site is not responsible for any misunderstanding.
TweetLikeShareLinkedIn

Checking in as always live at Nassau Coliseum from the Blog Box located in Section 201 getting ready for another live blog. Tonight we have a special guest, Vancouver Canucks blogger Richard Loat is in town visiting family and came out to support the Islanders tonight as they take on the Florida Panthers.

You can read what he has to say tonight as he will be on Twitter giving plenty of updates. Follow @mozy19 and myself @islesblogger on twitter all night for constant updates there as well as here in the live blog. 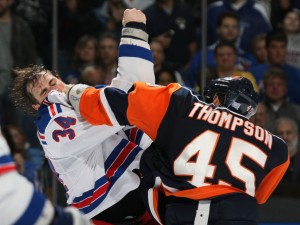 Yesterday the biggest Islanders news was the two game suspension given to defenseman Andy Sutton for his hit on Pascal Dupuis in Pittsburgh, but that overshadowed another piece of news—Nate Thompson being placed on waivers in order to free up a roster spot for a defensive call up from Bridgeport. It was expected that Thompson would clear waivers, but he did not. The Tampa Bay Lightning plucked Thompson off of waivers and he is set to play for them tonight in Florida. It was a risk that Garth Snow needed to take, Thompson has played well for the Islanders but let’s face it he can be replaced. The biggest hit will come on the penalty kill, one of Thompson’s best qualities as a defensive forward.

Good luck Nate, it was always a pleasure dealing with you and I know I will miss what you brought to the Islanders the last two seasons.

To replace Andy Sutton tonight, the Islanders called up defenseman Dustin Kohn from the Bridgeport Sound Tigers of the AHL. Kohn will wear number 56 tonight against the Panthers.

Your netminder tonight, Dwayne Roloson and expect Rick DiPietro to start on Saturday against the New Jersey Devils.

7:10pm Islanders push the opening draw forward and fail to gain full control, play down in the Islanders zone.
7:13pm Roloson makes his first save of the period, and then looked around to make sure he wouldn’t be called for a delay of game.
7:16pm Game is fairly even up to this point, granted it’s only five minute in. Neither team is setting a tone, for the most part.
7:18pm Bruno Gervais shows his rare rough side as pushes a Panther out of the crease after the whistle.
7:26pm Panthers are out shooting and out chancing the Islanders tonight, it looks like they are skating in mud.
7:32pm I hear this giant sucking sound, yea—that’s the Islanders tonight.
7:38pm Final minute of the first period. Note the lack of updates in my live blog….

Wow what a period! It took both teams a bit of time to get their legs moving but Florida has the edge in shots 14-6. Islanders looked better late in the first and had a few chances of their own, but they definitely need to generate more shots and offense. The forecheck isn’t really working tonight either, they need to wake up and perhaps hit up some Red Bull between periods. Let’s see what happens in the second frame.

7:59pm Islanders once again fail to fully control the opening draw and allow the Panthers a chance down low.
8:00pm Moulson finds Nielsen alone out in front, but Frans fanned on the shot as the puck was bouncing.
8:03pm Islanders with several chances bunched up here in the second. Jon Sim looking to get involved physically and catches a cross check or two behind the Panthers net.
8:04pm The Park, Weight and Bergenheim line seems to be getting chances tonight at will.
8:07pm Panthers on the board first, 1-0
8:09pm Islanders spring back to life after the goal, who’s out there? Park, Weight and Bergy – they had maybe four scoring chances. However, Bergenheim should have shot instead of passed in the slot.
8:17pm Islanders tie the game on a nice slap shot by Blake Comeau – Dustin Kohn may have his first NHL point on the play.
8:18pm Comeau from Dustin Kohn and Gervais that is Kohn’s first NHL point! Congrats Dustin.
8:19pm Doug Weight absolutely robbed by Vokoun on a virtual empty net. Nice desperation save there.
8:29pm New line out there for the Islanders, Bailey, Tavares and Okposo – three first rounders (12th, 6th and 1st respectively).

End of the second period

Much better period all around, shot count is now 25-22 in favor of the Panthers. Islanders tied the game on some great work in the Panthers end. No penalties thus far, Jon Sim is being a pest in front of the net and they are not calling a thing on him or the players playing against him.

The Islanders are getting to pucks, passing, shooting and really outplayed the Panthers that period. As I said earlier I think they realized they were actually playing tonight. Let’s see if they can keep it up.

8:50pm Islanders working hard already in the third, they need an early goal.
8:54pm Islanders have stormed back in the shot department and are one away from being equal at 26
8:58pm Of course, the Islanders get the first penalty of the game – 45 minutes in on a weak slashing call on Sim.
9:05pm Great pressure by the Islanders, but they called another penalty on Sim, this time for goaltender interference. Pathetic officiating tonight.
9:09pm Islanders kill off the second Sim call, but prior to that Nielsen and Okposo went in on a shorthanded two on one, Okposo gets crosschecked and taken down in front of the referee and there was NO CALL. Pathetic officiating and they hear it from the crowd in unison.
9:13pm Florida “FINALLY” commits a penalty….a high stick, two minutes.
9:16pm Weight with a chance in front but missed the net. Okposo and Tavares both crosschecked in the corner, no calls.
9:22pm Bergenheim just missed a wide open net.
9:23pm Roloson comes up big to preserve the tie late in the third.

And we are headed to overtime, what’s this the 40th time this season?

9:27pm Islanders need to wrap this one up quick and sink these Panthers.
9:28pm Islanders penalty to Comeau for slashing. Bad, bad, bad.
9:31pm Hillen caught with a broken stick, Islanders make huge clears. Streit just rocked his man along the boards and we are even up.
9:33pm Odd man rush in the final minute and Vokoun makes the stop.

End of overtime, we are headed to the shootout.

Game, set and match – Islanders win in a shootout 2-1