This post was published 11 years 8 months 28 days ago which may make its content inapplicable to the current Islanders roster and/or team news. This site is not responsible for any misunderstanding.
TweetLikeShareLinkedIn

Good evening everyone, this should be an interesting night for sure! 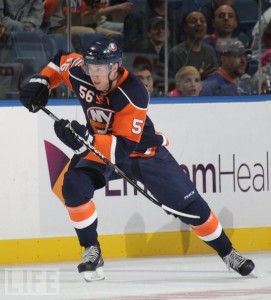 Less than a week ago on home ice, the New York Islanders took on the New Jersey Devils and not only chased all star and hall of fame goaltender Martin Brodeur after two periods, but they completely dominated play and shut out the Devils 4-0.

The Devils have been struggling as of late, I guarantee beating them tonight will be no easy task. However, that said they are without the firepower they were once getting with Elias out of the lineup and Bergfors goalless in the last 11 games.

In that 4-0 win on Monday afternoon, Rick DiPietro was between the pipes for the Islanders and earned his first shutout in only his third start of the season. DiPietro is once again your starter, look for some magic in that area given his strong play that seems to grow the more his confidence returns.

In their home win on Thursday night over the Florida Panthers, several players were ALL over the ice—even though they were without points I liked what I saw. The line of Park, Weight and Bergenheim was awesome the other night, as was Jon Sim. Okposo, Shremp, Bailey, Tavares and Moulson all had chances—great chances as did Doug Weight who looks like he is about to break out offensively himself.

Dustin Kohn made his NHL debut and assisted on Blake Comeau’s second period goal, giving Kohn his first NHL point. I witnessed the PR guys shuttle the puck down the hall to Kohn after the game, it’s amazing how many times I catch important small acts like that the more I am around the team. I hope he continues to play the game that earned him a call up to cover for Andy Sutton while he serves his suspension.

The Islanders are on a streak here at home, winning six consecutive games—and it’s no secret to the crowd as this is the second consecutive sellout.

This is a big night, against a conference and division rival so the points are HUGE.

Delayed start due to some problems with the ice where the Elementary school sang the National Anthem. There was a big carpet near the zamboni door.

7:13pm Islanders pull the opening draw back, the Devils got to it and shot it, it was deflected out of play.
7:14pm Devils taking it to the Islanders early, they look a bit more focused tonight
7:17pm Okposo finds a streaking Streit and Brodeur makes a great save or it hit the post. Devils come right back down and DiPietro makes one of his own.
7:21pm Devils control the puck from behind the goal line and pass out to an awaiting Langenbrunner, stick cocked—Goal 1-0 Devils.
7:24pm 9 minutes into the first, the Devils are out shooting the Islanders by the wide margin of 9-1
7:27pm Devils penalty for slashing, this should jump start the Islanders—hopefully.
7:29pm What a horrible power play, we had one shot. Dis.Organ.Ized.
7:34pm They sure aren’t making Brodeur work much tonight.
7:36pm DiPietro finds a fluttering puck through traffic with his glove. Islanders needs to step up their play here, shots are 11-4 with 6 minutes remaining.
7:38pm Hillen beats his man to the puck for an icing, and then takes exception to Davis’ late hit.
7:45pm This game feels the same way the Panthers game did on Thursday, you know except for the 1-0 in favor of the opposition and everything.

End of the first period.

Islanders got outplayed in almost every capacity during the first period. The Devils must have studied nothing but the tape of the Islanders last three games because they aren’t allowing them to establish their forecheck or generate any shots. They are clogging the lanes and stepping in front of every shot and pass much like the Panthers did the first period on Thursday.

Hopefully Scott Gordon has some heated words of wisdom for the Islanders, they need to find their game—or at least a game that works.

8:04pm Devils control the opening draw this period and take it back into the Islanders end.
8:05pm Islanders strong on the puck, leads to another power play. They are 0/1 with one shot so far tonight.
8:09pm Islanders fail to convert that power play, but added four or five shots to their total.
8:10pm Park just rang one off the post behind Brodeur, poor guy cannot buy a goal.
8:13pm Just wanted to add, the Islanders have hit three posts tonight….
8:14pm Nielsen alone in front, takes a few swipes at the puck but Brodeur makes the save, and then three more for good measure.
8:15pm Islanders now hold the edge in shots 14-13, now only if they can notch a goal to knot this up.
8:20pm Bergenheim injured on a boarding play, Colin White assessed a 5 minute major and a game misconduct. 5 minute PP
8:21pm Okposo ties it on the Power Play! Still a man up for 4:42, they can score at will with the major penalty.
8:22pm Okposo from Tavares and Streit
8:24pm Islanders score again on the major 2-1
8:25pm Hillen from Okposo and Shremp
8:26pm DiPietro needed to stop a short handed breakaway.
8:28pm HUGE turn of events, Islanders really capitalize on the major power play and score twice to get the lead. Shot count 18-13 in favor of the Isles.
8:30pm I gather Lamaire didn’t see that Coyotes-Islanders game last week? He failed to put someone in the box and the Islanders had an extended five on four until a whistle.
8:36pm Gervais in the box for hooking
8:38pm :32 seconds left in the period, Devils tie the game on the power play, ending their 52 pp scoreless skid

End of the second period.

Well, that was quite different. A big power play for the Islanders after White boarded and injured Bergenheim gave them two goals. A note of interest, the Islanders—should they have been able to, could have kept the man advantage for as long as they kept the puck in play as the Devils failed to put anyone in the box for the penalty. Hopefully Bergenheim returns, he looked to be cut pretty bad but got up under his own power.

The Islanders had 13 shots that period, the Devils 1—the complete inverse of the first period oddly enough.

The game is tied going into the third, but given the turn of events it should be a great third period.

8:56pm Islanders control the opening draw this period. They’re off.
8:58pm Report on Bergenheim as he has returned, full cage and broken nose.
9:05pm Devils controlling the flow to this point, not many shots but they have been in the zone a few times. Islanders FINALLY took a shot this period. Only took eight minutes.
9:13pm Shot did not count, almost 13 minutes into the third and the Islanders are yet to register a shot on goal.
9:14pm Bruno Gervais takes exception to a late hack on DiPietro and throws Salvador out of the crease.
9:17pm Devils take a 3-2 lead off a deflection and screen in front of DiPietro. The way he reacted makes me think he had no look at the puck.
9:19pm Two icings in a row, Scott Gordon needs to take his timeout soon.
9:23pm How this team can be so different from period to period escapes me.
9:28pm Devils make it 4-2 into an empty net.

Devils shots 14 and the Islanders 3 in the third.