This post was published 12 years 7 months 12 days ago which may make its content inapplicable to the current Islanders roster and/or team news. This site is not responsible for any misunderstanding.
TweetLikeShareLinkedIn 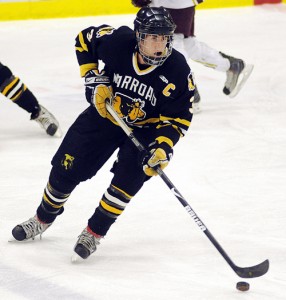 The New York Islanders have traded both of their second round picks (35th and 58th) to Chicago and move up to the 30th overall and select Center Brock Nelson. Just a note of interest, Kevin Connolly announced the pick at the podium.

Some info on Nelson, according to Hockey’s Future:

2009-10: Played for Warroad High School in Minnesota. In 31 games for Warroad, Nelson scored 53 goals and added 42 assists for 95 points. He finished with a +55 rating on the season. Nelson was a finalist for the Mr. Hockey Award as Minnesota’s top high school hockey player. Nelson is the nephew of former NHL player and 1980 Team USA member Dave Christian.

Nelson is committed to play for the University of North Dakota next year.

Here is a photo of Brock Nelson on the phone with Kyle Okposo, a fellow Minnesota resident. 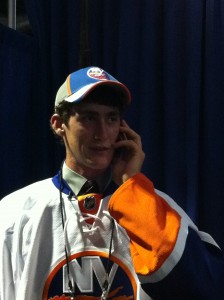