This post was published 11 years 4 months 3 days ago which may make its content inapplicable to the current Islanders roster and/or team news. This site is not responsible for any misunderstanding.
TweetLikeShareLinkedIn 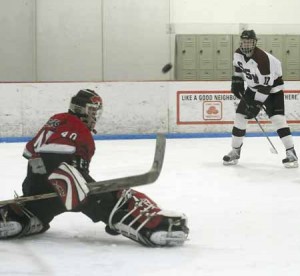 The Islanders have selected left wing/center Jason Clark with the 58th pick of the third round.

Jason Clark is a 6’2″ 182lb forward with a left handed shot. Last season he played for Shattuck-St Mary’s HS in Minnesota and has trained with fellow Minnesotan Kyle Okposo. In 54 games this season, Clark had 23 goals and 23 assists for 46 points.

Clark has committed to play for the University of Wisconsin next season.

Clark, according to Kyle Woodlief, of Red Line Report:

“He’s got the size and the tools – good hands and scoring touch – that NHL teams are looking for,” “He just hasn’t put it all together. He needs more intensity and drive.”

“He’s very effective when he plays a physical game”

Woodlief also notes that Clark is more of a shooter, then a playmaker.