This post was published 11 years 3 months 15 days ago which may make its content inapplicable to the current Islanders roster and/or team news. This site is not responsible for any misunderstanding.
TweetLikeShareLinkedIn 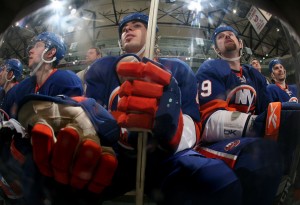 No, you read that correctly – I said Joel Rechlicz cupcakes….but I am only half joking here.

Yesterday, the New York Islanders placed forward Joel Rechlicz, a player those of us in the Blog Box have grown to know (and in some cases love) the last year, on waivers. Unfortunately, he has found himself the odd man out of the enforcer situation, a position the Islanders appeared they felt they didn’t need the way Rechlicz and Trevor Gillies bounced back and forth between Bridgeport and Long Island.

Gillies, who was signed to a one year extension back in April and Zenon Konopka who signed as a free agent on July 2nd make getting a call for enforcer duty next to impossible for Rechlicz. Great young player, but a victim of circumstance none-the-less. It was announced today that he has cleared waivers,

The Islanders have announced today, 07/16/10 that Rechlicz’s contract has been terminated and he is now a unrestricted free agent.

Now, what about these cupcakes?

Ok, so earlier you may or may not remember reading something about cupcakes. Maybe that’s the only reason why you’re still reading – I don’t know. However, there is now an official Islanders cupcake vendor. Yes, cupcake enthusiasts rejoice!

Per the Islanders Press Release:

The New York Islanders announced today the addition of a new corporate partner in the unique sponsorship category of cupcakes. The Islanders have signed an agreement to designate Cupcake Gourmet, Inc. as the official cupcake supplier of the Nassau Veterans Memorial Coliseum and the New York Islanders Hockey Club.

“To be the official cupcake supplier of the Islanders and Nassau Coliseum is huge to me,” Amy Brady, Owner of Cupcake Gourmet, Inc. said. “I fell in love with the team when I moved to Long Island 15 years ago and to be a part of their world feels great.”

Justin Johnson, Senior Vice President of Corporate Partnerships & Marketing for the Islanders said: “We are thrilled to launch this partnership with Amy and Cupcake Gourmet as we continually enhance the everyday menu board for our fans.”

The Huntington, N.Y.-based Cupcake Gourmet company will sell cupcakes designed with the Islanders’ logo and traditional orange, white and blue colors during all 2010-11 home games. The cupcakes will become available at all entertainment events at the Coliseum, beginning August 18 with The Wiggles: Wiggly Circus.

You can read some more over on the Islanders website, however I must disappoint as you won’t be eating a cupcake with Joel Rechlicz’s image on it anytime soon….