This post was published 12 years 3 months 28 days ago which may make its content inapplicable to the current Islanders roster and/or team news. This site is not responsible for any misunderstanding.
TweetLikeShareLinkedIn 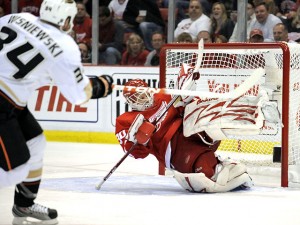 Last weekend, the New York Islanders traded a conditional third round draft pick to the Anaheim Ducks for James Wisniewski, a 26 year old, 5’11” 205 lbs powerhouse of a defenseman. In the press release, Garth Snow praised the young defenseman saying “We see James as a key addition to our team and we feel our fans will connect with his style of play,” and also that “He is a solid puck-moving defenseman who can bring an added element of toughness to our blue-line”.

Toughness seems to be the focus this offseason, having already added Milan Jurcina and Mark Eaton to the defense, as well as Zenon Konopka, Jeremy Yablonksi and just this week the resigning of Jon Sim to the forward corps – Wiesniewski certainly brings an extra element of toughness, just check YouTube for some highlights. But he’s not just a physical defenseman, Wisniewski had a career-high 30 points (3 goals, 27 assists) in 69 games with the Ducks last season and logged over 27 minutes a game. Should he be paired with Mark Streit, especially on the power play, they could become quite the prominent force for the Islanders.

Something else “The Wiz” brings to the organization, a winning attitude – the man spoke nothing but praise for his opportunity to be a first pairing defenseman, his desire to restore both glory to the franchise and most importantly, his desire to win. He said all the right things during his introductory interviews, and it was no different this evening with me as we had a brief one on one phone interview.

I understand that you’ve been trying to find a place here on the Island? How’s that going?

Yes, my wife and I for the last couple of days have been looking, well today I played golf but we’ve gone to a few different towns looking at different houses to get a feel for the area.

Have you experienced Long Island at all, prior to this?

No, actually I have not. This is the first time, and I tell you what – it is quite underrated. This is by far one of the most beautiful places I have ever been to.

Glad to hear that! Have you gotten a chance to check out the beaches yet?

Nope, we haven’t been down to the beaches yet – we have spent a lot of time up on the North Shore around Huntington, Oyster Bay and Old Brookville, played golf at Sebonac today so I kind of did the whole tour of the Island so it’s been quite beautiful.

I read what you had said previously on being traded to the Islanders, You’re excited to play for the Islanders, can you tell me a little bit about how you feel this opportunity is going to be?

It’s kind of what I had been through before in a way, obviously I was part of a young core with Chicago and now I am more of a veteran guy coming into a team that is on the rise and has all this skilled talent and I am really looking forward to playing a big part and a big role in the rebirth of this organzation.

How do you feel moving into the Eastern Conference, especially the very tight Atlantic Division?

I would personally have to say that this is by far the hardest division. If you look at the teams, just the grind of every game and a bunch of teams making the playoffs. Obviously we get to play these teams six times each but the travel is going to be way better though, coming from the Western Conference where you have to take a flight everywhere, except obviously LA where we would bus up there but other than that we had one flight that was an hour, mostly two and often four hours everywhere else.

I know you spent time in the Chicago organization where you got to experience the Blackhawks – Wings rivalry, are you excited about the Islanders – Rangers rivalry and have you heard anything about it from some of the other guys?

Well yea, they asked if I liked the Rangers and I said – no! [laughs] Then they all said good, and after listening to them explain there is a lot more hatred for the Rangers then there is for the Hawks and Red Wings, so I am looking forward to coming into one of top rivalries in all of sports.

Now that guys like Chris Pronger are on the East Coast, he’s given the Islanders some trouble – especially with some hits on John Tavares last season. Will you be answering for these types of hits on the younger talent on the Islanders?

I think a lot of it is, what you have to try to do, is you answer by being physical with their forwards. You have to finish all of your checks no matter who you’re playing, and you know, that’s part of my style of play is to be physical. I’ve played with Pronger when I was with Anaheim and everyone knows that’s how he is going to play, so you’ve just got to play the same way. 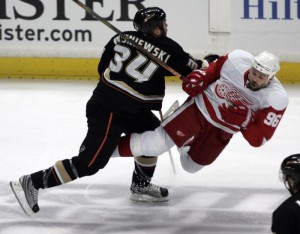 Garth Snow definitely changed the physical element of this team, they recently resigned Jon Sim, brought in Milan Jurcina and Mark Eaton as well as Zenon Konopka, and Jeremy Yablonski. What do you feel you add to the organization in addition to those other guys?

Well, everyone brings a little bit of size and physical play. Eaton won a cup with Pittsburgh and Jurcina was part of the Capitals resurgence, myself I think I bring an all around element that’s part of my game – I am very physical and have a lot of offensive ability and great leadership. I think a lot of the guys are going to bring different things and I think they all look forward at taking part in turning this organization around.

It sounds like you will fit into Scott Gordon’s system. Have you gotten a chance to talk to Coach at all about what he expects from you or just given you a heads up on his style of play?

Actually, I have not! I’ve not really had the chance to talk to anyone on the coaching staff. I am looking forward to playing for him though, I love his style of play, I am a big fan of his [Scott Gordon’s] he’s a very demanding coach, he expects a lot out of his players and wants high offensive players and you’ve got to be creative. It’s something I look forward to, playing in that style of play that he has.

What are some areas you feel you need to improve on personally?

Personally, I feel that everyone could work on becoming a better skater so, one thing I work on during the summertime is explosiveness. I want to be reliable to play 25-30 minutes a night because that’s the role I want to play, I want to log a lot of minutes so I want to focus on making sure that I am not tired or fatigued come the third period or throughout the season.

Do you have any goals for the upcoming season?

Honestly, my goal is just to WIN! When you win, everyone is happy. It doesn’t matter to me personally, I just wanna help this team win and you’ll get rewarded with your personal stuff when teams win.

Do you look forward to playing with the young talent the Islanders have? Specifically in a veteran role being you’ve been through a similar situation with the Blackhawks?

Oh absolutely, I see myself as having leadership qualities so, these kids can be really fun to play with, being part of the young talent is great and obviously it will be great to give advice. It’s also interesting not knowing anybody, I think I only know two guys on the team. For me it will be a little different not knowing anyone, going to Anaheim from Chicago I knew some of guys. So only knowing two guys it will be different, but, that’s the duty about being a professional athlete, you get to make new friends. You’re usually not going to be on the same team the whole time, so it’s going to be fun to meet new guys and build some chemistry with them and the organization.

Nobody Beats the Wiz!

James Wisniewski is genuine when he says he wants to win, I’ve heard many different players say that over the years – but the passion behind his voice is different. He believes in what Garth Snow is trying to accomplish here on Long Island, he’s willing to prove his value to his new team and for the first time he will be given his chance to shine. Garth has a pretty good track record when it comes to finding diamonds in the rough, Mark Streit, Matt Moulson and Rob Schremp to name a few – so it’s not out of the question that Wisniewski could find his home here on Long Island.

It’s true what they say though, Nobody Beats the Wiz.

The Islanders will be a different team when they play Dallas during the 2010/2011 opener in a few short months, I doubt the final roster is set – but I like what Garth Snow has put together so far. Is it October yet?