This post was published 12 years 4 months 11 days ago which may make its content inapplicable to the current Islanders roster and/or team news. This site is not responsible for any misunderstanding.
TweetLikeShareLinkedIn 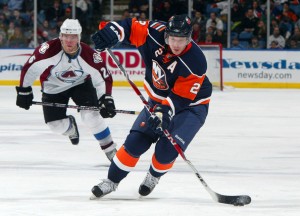 Jim McIsaac/Getty Images
According to Katie Strang’s Twitter feed, all-star defenseman Mark Streit will be out approximately six months with a torn rotator cuff and torn labrum suffered as a result of a hit during yesterdays intrasquad scrimmage at Nassau Coliseum.

This is a tough, tough loss for the Islanders – who were going to be riding a solid defensive pairing on the power play in Streit and newly acquired James Wisniewski.

According to Newsday’s Strang, the Islanders will be looking to bring in someone on a tryout basis the remainder of camp – but I wouldn’t be surprised to see some sort of roster move here to bring in extra help on the back end.

Katie Strang just updated her Newsday blog with some extra information, including who has been invited in for a tryout.

She also reports that Kyle Okposo will also see a specialist for his ailing shoulder as well, there is currently no timetable for his return.

Now, all these injuries – especially major injuries begs this question: Exactly how much contact, is too much contact for training camp? Do the benefits outweigh the risks here? Especially losing a player like Streit for such a long period of time well before the season even begins.

The hit was labeled as “flukish” yesterday by Head Coach Scott Gordon, but I still wouldn’t want to be in Matt Moulson’s shoes right now – but it’s all part of the game I suppose.