This post was published 12 years 4 months 10 days ago which may make its content inapplicable to the current Islanders roster and/or team news. This site is not responsible for any misunderstanding.
TweetLikeShareLinkedIn 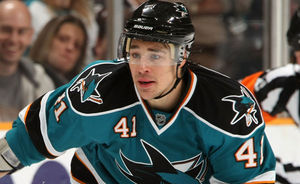 The Islanders have added one more name into the mix of players coming into the remainder of training camp for a tryout – Jed Ortmeyer. Ortmeyer, a former New York Rangers forward joins fellow former Ranger P.A. Parenteau, so at least he should have someone he is familiar with at training camp.

The New York Islanders announced today that Jed Ortmeyer has accepted an invitation to Training Camp on a Professional Tryout (PTO).

Ortmeyer posted NHL career-highs in goals (eight), assists (11) and points (19) in 76 games with the San Jose Sharks last year. The Omaha, NE, native has skated in 306 NHL games with the New York Rangers, Nashville Predators and Sharks. Ortmeyer, a 6-0, 190 lbs. forward, turned pro with the Rangers in 2003-04 after a four-year collegiate career at the University of Michigan

Ortmeyer will be skating alongside a few other players who also accepted tryouts with the Islanders yesterday.

This is just another indication, and proof that GM Garth Snow is constantly looking for options and always has lines in the water. These PTO’s are great because there really isn’t any risk involved. Should a player brought in work out, great – they can be offered a contract and spot on the roster. If they do not work out, no harm no foul – better luck elsewhere.