This post was published 12 years 4 months 9 days ago which may make its content inapplicable to the current Islanders roster and/or team news. This site is not responsible for any misunderstanding.
TweetLikeShareLinkedIn

Well, when it rains it really pours – or so they say anyway.

The Islanders announced some more unsettling news today regarding Kyle Okposo, and it’s not good. It seems Okposo will miss an unknown amount of time with a shoulder injury that requires surgery and will be out indefinitely. You can read some more on Katie Strang’s Blog.

This is now two impact players down and out with major shoulder injuries in the span of four days. Okposo had been injured last week during training camp and has been held out as a precaution. He was re-evaluated today and the findings were apparently not very good. Hopefully the rash of shoulder injuries ends here. I had shoulder surgery on my right shoulder and may actually need the same surgery on my left because of hockey, so I know it’s no fun trying to function, let alone play hockey with a bum wing.

Hopefully Kyle will be back as quick as possible, but in any event – this opens up a forward spot for someone looking to make an impact out of training camp. 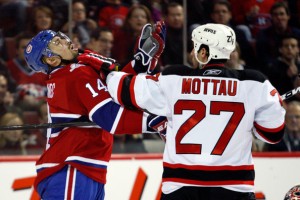 In other news today, the Islanders have signed defenseman Mike Mottau to a two year contract.

The New York Islanders announced today that they have agreed to terms on a two year contract with defenseman Mike Mottau.

“Mike is a solid puck-moving defenseman who will bring more experience to our blueline,” said General Manager Garth Snow.

Mottau, a 6-0, 197 lbs. left-handed shooting defenseman, was drafted by the New York Rangers in the seventh round, 182nd overall, of the 1997 NHL Entry Draft. After a four-year collegiate career at Boston College, he turned professional in the 2000-01 season, playing in his first 18 NHL games with the Rangers. In 258 career NHL games with the Rangers, Calgary Flames and Devils, Mottau has seven goals and 46 assists for 53 points with a +10 plus-minus rating and 137 penalty minutes. Mottau has also skated in 17 Stanley Cup Playoff games, all with New Jersey, in which he’s recorded four points (two goals, two assists).

Islanders fans may remember Mottau, not just as a New Jersey Devil defenseman – but also as the d-man suspended two seasons ago for a vicious elbow on Frans Nilesen that made Nielsen miss significant time with a knee injury. Let;s hope those two put that behind them….

Obviously the addition of Mottau is a stop gap measure for the loss of Mark Streit – I wonder how Mottau and Wisniewski would look together on the blueline.