This post was published 12 years 3 months 10 days ago which may make its content inapplicable to the current Islanders roster and/or team news. This site is not responsible for any misunderstanding.
TweetLikeShareLinkedIn

It never fails, I have said this a bunch of times – life tends to get in the way of blogging. A half of dozen times over the last week plus since I last wrote – I actually half wrote something and either got sidetracked or was just to busy to get something out there. I’d like to think of myself as Oleg Kvasha (heh – remember him?) in that department. Plenty of skill, but often disappears for long stretches and drives you bananas.

Enough self assessments. On to hockey.

So as of today, the Islanders sit second in the Atlantic division having played 8 games with a record of 4-2-2 for a total of 10 points. They are one point back of the Penguins who have played one more game than the Islanders. With wins in Toronto and Tampa, the Islanders showed quite a bit of resiliency against tough opponents. They didn’t give up and chugged along, scored timely goals and the special teams continued to shine.

Saturday night in Florida against the Panthers, although the Islanders lost, we saw John Tavares score his first NHL hat trick, two of which were gritty goals in front of the net off rebounds and deflections and two of the three were both on the power play. I know one game isn’t all too great of a concern, but you cannot rely on one person to score and then rely solely on your goaltender to steal two points.

Nino, Does he stay or go?

Cue a new version of The Clash’s Should I Stay or Should I Go….. 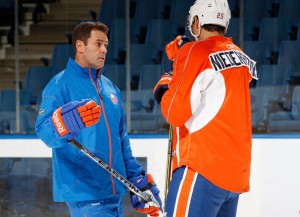 This next subject is a bit of a hot stove topic because the argument can be made for both sides. On one hand, Nino Niederrieter hasn’t looked out of place at all. He hits, he gets into scoring position and creates room for his teammates while on the ice. While he HAS produced (1 goal and 1 assist in 8 games) he has also taken a fair amount of shots (12, tied for tenth on the team with Doug Weight). Is that production enough to justify keeping him up the remainder of the season and burning the first year of his entry contract?

Scott Gordon had said last week that he felt Nino was different than Bailey when he was kept up. He’s a different player, stronger and already smarter than Josh was at the same point in his development. It’s clear that Bailey’s development hasn’t been hurt by being kept up a full season (he was on fire until he went down due to a hip pointer) – so wouldn’t it make sense to keep Nino around?

Personally, from what I have seen from Nino, going back down and playing in Portland may actually hurt his development. He’s a world class player with a great deal of talent – in a way I feel like that type of situation isn’t going to benefit him in the long run. I understand the fear in bringing a player up too quickly, but he’s not looked out of place.

A tweet from Newsday’s Katie Strang earlier today: Josh Bailey will be playing tonight when the Islanders face the Montreal Canadiens in Montreal.

Before Bailey suffered the hip pointer in Toronto, he was on a tear. He was the Islanders leading scorer at the time, but is still up there in good company (3 goals, 3 assists, 6 points in 6 games). He had all the confidence in the world and looked like a complete beast out there, strong play on the puck and in the corners, would initiate contact all over the ice – that’s the player I hope we see tonight.

From The Trainers Room

While we are on the subject of players on the mend, Andy MacDonald is out 3-4 weeks after suffering a hand injury. He underwent surgery a few days ago to repair the damage (from what I believe was a shot).

Michael Grabner, is sitting tonight out with a sore groin – in his place the recall of Matt Martin who will be making his season debut. It should make for an interesting game with Konopka, Gillies, Sim, and Martin all in the lineup (think there will be retribution for the Cammalleri’s slash on Nino? I do.)

Trent Hunter who’s been nursing a foot injury will be a game time decision and Rob Schremp is still nursing his sore back that was injured during the preseason, although he has been going through full practice with the team.

The Habs are 5-2-1 with 11 points and are coming into tonight winning the last two – they have always been a tough opponent for the Islanders both home and on the road. I guess only time will tell, but from what I have seen from our Islanders as of late – odds are it will be a great game.