This post was published 12 years 2 months 22 days ago which may make its content inapplicable to the current Islanders roster and/or team news. This site is not responsible for any misunderstanding.
TweetLikeShareLinkedIn 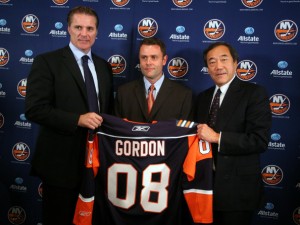 Over the course of these last ten losses the Islanders have been handed, you could feel the pressure building from the outside. With each step, each mistake and each time the hole got deeper and deeper it was only a matter of time before someone suffered. That person was Scott Gordon, as we found out this morning.

Ten losses in a row is unacceptable in professional sports, although it is a little easier to cope with in the NHL with the long season and parity in the league. Regardless, when teams are spiraling out of control management will do all it can to right the ship by shaking things up, more often than not that starts with a coaching change.

News first hit this morning via Twitter and then an announcement on the Islanders home page. Islanders GM Garth Snow was quoted as saying: “We believe we need a change in direction and, with the majority of the regular season still ahead of us, our goal remains to qualify for the Stanley Cup playoffs”. And followed with “Scott has made tremendous strides with our team the past three seasons and I look forward to continuing our relationship in an advisory capacity.”

Yes, although technically “fired”, he was reassigned to a front office gig.

Gone now are the days of “overspeed”, or are they? Jack Capuano has been coach of the Islanders AHL affiliate since the 05-06 season, but when Gordon was hired by the Islanders – the Sound Tigers adopted the same systems so the players would be familiar with the big clubs system once they were brought up. It was a good idea in theory, with just one problem – the system clearly had some flaws.

Arguments are already being made that switching coaches with the same players playing the same flawed system isn’t much of an answer or a change. What I want to point out however, is that Capuano could revert back to his systems utilized prior to switching in Bridgeport. I guess time will tell. If I could offer any advice for Wednesday – it would be that he allows them to go out there and play hockey.

So, I happen to be home sick today (I am always amazed that this stuff happens when I can barely breathe and have no voice…) and lucky for me I got to call into the press conference this morning.

When I signed in at 11am, there were already 31 other people on the call – with more coming before the 11:15 am start.

Garth Snow shot right out of the gate and began his press conference by saying their focus was on a big game coming up against Tampa on Wednesday. He wants a big win in front of the home fans. When asked why he chose Jack Capuano, he said “Capuano has experience with our organization and our players so he can come right in and feel comfortable so there is no “feeling out” period”.

Garth was then asked if he was disappointed it had come down to a coaching change and if the decision was a difficult one to make. Garth replied by saying “Yes, it was disapointing as Scott is an excellent coach and a good friend, it was an excellent experience these last three years. Sometimes, decisions are tough and you have to go with your gut”.

When asked what the biggest issues the team would have to overcome, Garth said “I think the biggest issue is confidence, we are looking to get that swagger back that we had early in the season”.

When asked if he had spoken to any available NHL coaches, Garth skirted the question and said he wasn’t really looking past Wednesday and reiterated he was comfortable with Capuano because of his familiarity with the team and players.

Jack Capuano cannot be expected to be brought in and work miracles, however from what I have seen of him down in Bridgeport he is a likeable and talented coach. As we have seen before, the Islanders have promoted their AHL coaches with mixed results (See Steve Stirling). For once, as a fan – I wish to see a coach turn the team around and give some stability to a franchise in desperate need of stability.