This post was published 12 years 2 months 7 days ago which may make its content inapplicable to the current Islanders roster and/or team news. This site is not responsible for any misunderstanding.
TweetLikeShareLinkedIn

This is a really late recap – I know Michael, shame on uh..I mean yourself.

Let’s chalk it up to a turkey hangover. Perhaps even a hockey hangover, because I attended several NHL games and played in three myself the last six days (in case anyone wants to know I had 4 goals and 2 assists). I am available for that PTO at any given point Garth……

Well, where do we begin – I got your attention with quite a headline, hopefully a few laughs too because I am in a good mood.

By now mostly everyone knows that the Islanders beat the New Jersey Devils on Friday last week 2-0, effectively ending their FOURTEEN game skid and extending Capuano’s point streak to three games. His record in the NHL is now 1-2-2. While he has the Islanders playing much better, they still need to work on their special teams – it’s funny that you can watch a teams struggle at even strength, then with a man advantage and then back to even strength over the season. 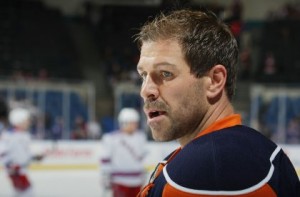 Maybe that’s where the Captain, Doug Weight comes in. It seems he was coaching the power play today during practice. With the Islanders putting up a big fat 0-fer the last 31 chances, I guess you can say anything could help – but that’s not saying Capuano is incapable of handling this himself – in fact, this was HIS idea.

Just read the paragraph below taken from the story on the Islanders website:

“I actually talked to Dougie and I thought it would be a good idea (to have him give the players some pointers),” Capuano said. “I saw him at the rink because he was getting some therapy and I picked his brain a little bit. I wanted to get a few ideas from him so we can build off it as well.”

Since Weight hasn’t played in the last four games, he’s watched from the press box. Sometimes watching games from above gives players a better view of the game and different areas the team could improve upon because they can see the play develop.

“He’s been around a long time,” Capuano said. “(He talked to the players about) what he sees up top during the game, puck movement, player movement not being so stagnant, getting pucks to the net, having a better net-front presence. These are things that we talk about, but sometimes a different voice is good too.”

To me, THAT is a quality that makes a great coach – he recognizes the value in a veteran player like Weight and sought out some advice on what could be done to implement change. Reading some of the message boards, many fans disagree and just chalk this up to another loony move the organization likes to make. Obviously I disagree here, and I guarantee you that this happens in varying situations throughout the league – ESPECIALLY when it involves young teams. 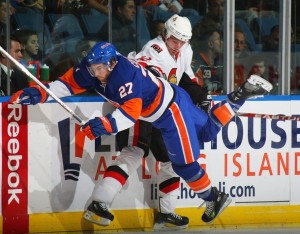 With some trade activity in the Eastern Conference today, the Islanders announced the signing of Center Jeremy Colliton, whom they selected 58th overall in the 2003 draft – to a two way deal. In spot duty for the Islanders, Colliton has one goal, two assists and sixteen penalty minutes in 42 games. Down in Bridgeport, with the Islanders AHL affiliate Sound Tigers, Colliton has scored 134 points (50 goals, 84 assists) in 250 career games.

Although there are numerous injuries to the Islanders, this signing is likely a depth move. It keeps Colliton down in Bridgeport and gives the Islanders another option at center should they want to try a different look. I shouldn’t have to remind anyone that the Islanders have quite a few centers already however.

Speaking of centers, Josh Bailey was injured this weekend down in Bridgeport where he is on loan to the Sound Tigers. Apparently, the injury bug follows the Islanders players to their farm team. It’s a shame too, because reports from CT were good, as Bailey had been working hard and racking up some assists. All that is reported thus far, is that it is a strained pectoral muscle – and nothing more.

But wait, there is more – Bruno Gervais suffered a fractured cheekbone in his fight with Colin White on Friday. Surprised? Maybe you didn’t see the fight….

Wait, did you feel that? Too bad the earthquake today didn’t happen when Gervais was felled in two punches.