This post was published 11 years 11 months 10 days ago which may make its content inapplicable to the current Islanders roster and/or team news. This site is not responsible for any misunderstanding.
TweetLikeShareLinkedIn 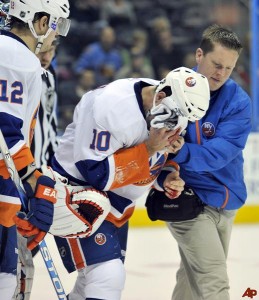 Step right up folks, men, women and children of all ages – give the wheel a spin. Everyone is a winner!

Round and round she goes, where it stops nobody knows – injuries for everyone!

Ok, ok – before we begin, I have many questions. Does losing and injury go hand in hand? Do injuries happen more to teams in that downward and never ending spiral towards the league basement? Do the Islanders require some sort of spiritual intervention to help rid them of the dark and evil forces that have taken over their teams health?!?

I admit, I may have gone a tad far with the last question – but inquiring minds want to know.

We are two years removed from a season that saw the Islanders lose a league record man games lost to injury (and one that earned us the right to draft Tavares first overall) – and it appears they are looking to shatter that poor statistic this season before we even hit the midway mark. Just a little while ago, Newsday’s Katie Strang tweeted that defenseman Mike Mottau who nearly lost an eye in Atlanta last month (and was just recently cleared to play) will miss the remainder of the season with a hip injury that requires surgery. She claims that the injury was lingering and actually happened prior to the eye injury.

If that’s not enough, the oft-injured Rick DiPietro has been placed on injured reserve with swelling on his right knee. The jury is still out on this curious move, as the swelling has been called minor and his being held out as “precautionary”. One always fears it could be more than meets the eye, but it could also be simply for book keeping purposes.

Let’s recap shall we?

The longer players such as Okposo, Streit, Mottau, Weight and now DiPietro stay out – the more this total increases by FIVE every single game the Islanders play. The totals do not include games scratched – for those wondering as it’s not a game lost to injury.

But you know, the games lost to injury have NOTHING to do with a long losing streak or a lack of scoring, right? It may not be the SOLE cause – but it’s a large one.