This post was published 12 years 15 days ago which may make its content inapplicable to the current Islanders roster and/or team news. This site is not responsible for any misunderstanding.
TweetLikeShareLinkedIn

When the Islanders play the Capitals at home, it’s always one of my favorite games to attend. Consider me a closet Ovie fan – I have yet to break down and get a red number eight sweater, but I will (someday). Never mind that little bit though…we are here to talk Isles.

These games are my favorite because the Islanders always seem to play the Caps well and it’s a team I really hope they emulate. The Capitals aren’t too far removed from their rebuild and they keep taking the South East by storm season after season. 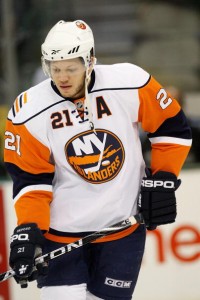 Tonight is even better – as three of the most important Islanders are set to return. The biggest of story of the three is how Kyle Okposo will play in his first game this season after missing the last 44 games, due to suffering a torn labrum in his shoulder during preseason. This team has missed his leadership, his skill and of course his grit. Who else is returning you ask? Only the most underrated defensive forward in the game, Frans Nielsen. Nielsen has sat out the last handful of games with a sore groin, but makes his return alongside Okposo and some other guy you may have head about named Rick DiPietro.

DiPietro has had a strained adductor muscle (groin) and then had a bout of the flu. He gets the start tonight, Okposo will play on a line with Nielsen and Grabner – which will be the line to look out for. Okposo and Nielsen will also wear an “A” tonight along with defenseman Andrew MacDonald.

Unfortunately for Rob Schremp – that means he is the odd man out this evening.

Keys to the game: Play Ovechkin’s line well and stay out of the box. Keep the shots to a minimum and from the perimeter, allow DiPietro to see whatever shots he can, clear the front of the net, rebound control, and SHOTS. The Islanders sometimes have a habit of passing instead of shooting. I chalk that up to a young team looking to make that perfect pass to set up their teammates. While that is admirable, it’s not a quality that wins hockey games….at least not when everyone else is looking to pass as well.

I am certainly curious to see how this game plays out with Okposo now playing. I am sure head coach Jack Capuano would prefer to ease him into use, but we know how that goes sometimes.

More after the drop of the puck!