This post was published 12 years ago which may make its content inapplicable to the current Islanders roster and/or team news. This site is not responsible for any misunderstanding.
TweetLikeShareLinkedIn 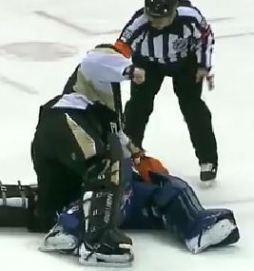 News hit the wires a little while ago that Islanders Goaltender Rick DiPietro will be out 4-6 weeks with facial fractures suffered in his fight with the Penguins Goaltender Brent Johnson.

When DiPietro decided to fight the other night, I knew the moment he took the one lone punch that something was wrong. The whole situation played out eerily similar to how Bruno Gervais fight went earlier in the season.

I shake my head at this situation because it was just totally unnecessary and has completely handicapped the team (which, well I won’t go there).

Lawson is out with a knee injury.

Nabokov is playing with the bubbles in his bath.

Well we have that veteran guy, Roloson. Nope, that’s right he’s in Tampa.

Koskinen is down in Bridgeport – but chances are he won’t see the NHL this season. We cannot rush BOTH of our goaltender prospects.

Garth Snow is going to get awfully creative here in the next day or so.

I’ll post some more in a while – this is all iPhone typing here.

Never a dull moment around here, is there?