This post was published 11 years 7 months 24 days ago which may make its content inapplicable to the current Islanders roster and/or team news. This site is not responsible for any misunderstanding.
TweetLikeShareLinkedIn 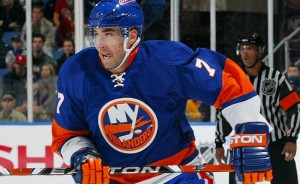 Just in case those in Islanders country expected otherwise, or just haven’t noticed that Trent Hunter has been missing a while – the Islanders confirmed today that Hunter will sit out the remainder of the season with a torn MCL.

Katie Strang had the scoop today (subscription required) – saying Hunter would undergo surgery at some point this afternoon.

Hunter apparently tried to rehab the knee and push the surgery for the offseason but couldn’t, as his knee only got worse.

The 30-year old Islanders forward, played in only 17 games this season – scoring a goal and three assists.

Earlier this season I had posted an entry on the Islanders man games lost to injury. That number (back in December) was 162. Since then, the number has DOUBLED and is now sitting at 336.

As I was writing this, the Islanders apparently had EVEN MORE bad luck – Kevin Poulin was helped off the ice after what appeared to be an injury to his knee during warmups. Mikko Koskinen will likely get his get his first NHL start unless Poulin is no worse the wear – we shall see.

The puck is set to drop against Toronto shortly.