This post was published 11 years 11 months 26 days ago which may make its content inapplicable to the current Islanders roster and/or team news. This site is not responsible for any misunderstanding.
TweetLikeShareLinkedIn

Dealing with the injury to rookie netminder Kevin Poulin, who suffered a dislocated kneecap last night during warmpups, the Islanders suddenly found themselves in serious need of veteran goaltending.

The rookie who’s job it was to back up the rookie Poulin; Mikko Koskinen – was thrust unexpectedly into the Islanders lineup in relief of his fallen Bridgeport and Islanders teammate. Koskinen did not fair well though, allowing two goals on his first four shots and then allowing five before the night was over. The Islanders summoned Joel Martin from Bridgeport on an emergency basis and he arrived at the start of the third period of last nights game. 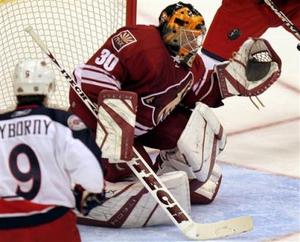 The cost? A sixth round draft choice in 2011 went to the Phoenix Coyotoes in exchange for Montoya, who coincidentally was involved in a fight with Rick DiPietro during a preseason Rangers game a few seasons ago. The Islanders immediately assigned Montoya to the Bridgeport Sound Tigers where he will most likely wait for the Islanders to return home from Montreal.

Per the Islanders press release:

Originally selected by the New York Rangers in the first round, sixth overall, of the 2004 NHL Entry Draft, Montoya has played in 197 career AHL games with the Hartford Wolf Pack and San Antonio, compiling a 96-72-7 record with nine shutouts. Prior to his professional career, the 6’2”, 195-pound goalie enjoyed a three-year career at the University of Michigan. He led the nation in minutes played (2358:51) in his final season (2004-05) and finished his college career tied for the all-time best career save percentage (90.8) in U. Michigan history, third in GAA (2.36), third in shutouts (13), and fourth in wins (86).