This post was published 11 years 9 months 9 days ago which may make its content inapplicable to the current Islanders roster and/or team news. This site is not responsible for any misunderstanding.
TweetLikeShareLinkedIn

In a span of four days, the weather has gone from just below 70 degrees back to the mid 20’s and then 5 inches of snow. February is one of those months that just drives me crazy here in New York sometimes. 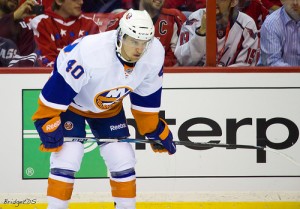 Even though the weather has been all over the charts, the Islanders have been pretty consistent in their play through the month of February, going 7-3-0 through the last ten games. Several young Islanders are proving that the team will be a force to be reckoned with soon enough, and the Islanders could potentially have three 30 goal scores for the first time in what feels like forever. Michael Grabner, John Tavares and Matt Moulson are all very close – 25, 23 and 23 goals respectively.

The team has been showing the league that they won’t be pushed around any more, lead by the tough veteran leadership of Zenon Konopka – a player I hope Garth Snow signs to an extension soon, as he has really changed the dynamic of this team. He’s not only changed the personality of the team, he’s also influenced changes around the team – like the goals song for example.

Even though Konopka deserves much of the credit for their recent change in toughness, a lot has to be credited to Interim head coach Jack Capuano. Even though he’s flown relatively low under the radar, his attitude towards the game and respect with his players has been instrumental in believing in themselves. He’s gotten his young players such as Travis Hamonic playing at a level everyone has to be happy with – he also has the team taking the season on a game by game basis, which is evident by this quote from Hamonic:

“This next game against Florida is the biggest game of the year,” Hamonic said. “We’re going to take it one at a time, but we’re going to go out there, have fun, play as a team and try to get results that we want. When you play that way and you’re having fun, a lot of good things happen.”

For the most part, good things have been happening. The team has really surprised some great teams as of late, they won four in a row for the first time this season – only to fall to the Bruins at home last week. Instead of hanging their heads in defeat, they came out the very next game and beat a strong Los Angeles Kings team at home Saturday 3-0. That should only help this team believe they can win against anyone, especially teams that may take their speed and talent for granted.

As the Islanders get set for a matinée game this afternoon against the Florida Panthers, you can’t help but wonder what would be the case if the Islanders hadn’t suffered all the injuries and gone on that massive losing streak earlier this season. Perhaps players like Grabner wouldn’t be shining so bright, perhaps Scott Gordon would never have been fired and perhaps, the Islanders would never have stood up and decided to change their image. 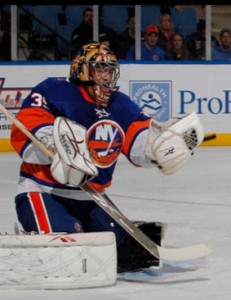 As a fan, perhaps I would have wanted the team to win some more games earlier this season – but on the same token, I think this young franchise has really turned a corner and now believes in themselves enough to make some waves the remainder of this season and the coming years.

Al Montoya gets the start today, another player that GM Garth Snow has taken a chance on, another former first round draft pick to add to the Islanders collection and yet another player who is proving little by little that he may just fit into the long term plans here on Long Island.

Your other Islanders scratches for today, Bruno Gervais and Rob Schremp – in their place Ty Wishart and Matt Martin, who returns from serving his four game suspension. Your fourth line is now a pretty dangerous one – Martin, Konopka and Haley, despite their toughness they are actually fairly versed offensively.

It should be an interesting game here on Long Island.