This post was published 11 years 5 months 8 days ago which may make its content inapplicable to the current Islanders roster and/or team news. This site is not responsible for any misunderstanding.
TweetLikeShareLinkedIn

Things have been downright slow in Islanders Country, so slow – that news of Ice Girl Tryouts and apparently something else that may, or may not, be edible with an Isles logo will be coming soon seem exciting to the hockey famished freaks, like myself.

Then as always there is the latest and greatest fad for those who follow other teams not named the New York Islanders, mock and bash them for every step they make (or even don’t lately).

Cue the chorus, we have Jersey Gate.

If you’ve been following lately, you’ve seen some leaks posted out on the interwebz claiming what could be the Islanders third jersey for the upcoming season. It’s hard to explain, well no – it’s not. It’s a jersey sans the awesome crest on the chest that we have all come to know and love, it features colors that were a fixture way back when Starter was the NHL’s uniform designer – yeah, we’re talking black folks.

It’s easier to just show you a picture, courtesy of my friend Greg over at Puck Daddy that ran last week – this was round one of Jersey Gate: 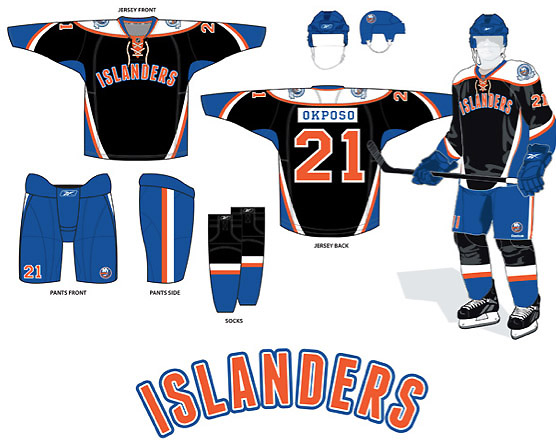 I don’t really have an opinion on the jersey, well – I likely wouldn’t buy one, I absolutely love the old-school retro nod to the glory days the team is currently wearing. I’ll certainly be purchasing one of those this year, you know – with the 40th Anniversary Patch.

The team did issue a statement last week however, in reference to this leaked design, via their Twitter Feed:

Fast forward to the second alleged leak of a similar jersey design over on Icethetics and we have this image:

We already knew how I stood on the first design, the second is pretty much the same.

The Islanders have asked their fans what they wanted in a third jersey – I doubt they’d ignore that given how active they are in the Social Media department.

Have a little faith fans, until then – I point back to their short statement via Twitter earlier in this post.