This post was published 11 years 3 months 24 days ago which may make its content inapplicable to the current Islanders roster and/or team news. This site is not responsible for any misunderstanding.
TweetLikeShareLinkedIn 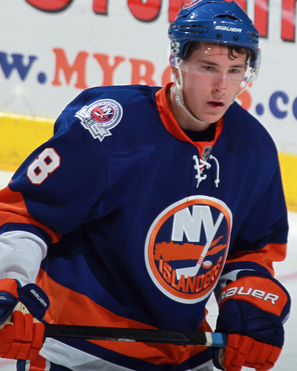 It always seems to happen this way, the off season takes forever to pass – but here we are already almost three games into the 2011/12 NHL season, at least for the Islanders.

Earlier this afternoon, the Islanders sent their 2011 5th overall draft pick Ryan Strome back to Niagara IceDogs of the Ontario Hockey League (OHL). Unlike years past, in which the Islanders give a majority of their young newly drafted players a quick nine game taste of NHL action, Strome stuck around long enough to experience the rigors of the NHL preseason and take in two NHL contests from the Owner’s box before being sent back down to Juniors.

This is a big development, not because he didn’t play, but because the Islanders chose a completely different path for the young Strome. Perhaps it’s the decision of now Head Coach Jack Capuano, perhaps it’s Garth Snow learning from his mistake with the rushing of the oft-invisible (for now) Josh Bailey or, it could just simply be Strome didn’t look ready for the NHL – and that’s fine.

Not everyone can be John Tavares or Kyle Okposo and step right into NHL duty and fit in, nor – are they Nino Niederreiter, whom in his nine games looked decent.

In any case – Strome is home.

Now, this next bit is something I cannot make up. Rick DiPietro has suffered another injury, this time in practice off a laser of a shot from Marty Reasoner. The puck hit DiPietro’s mask and shook him up I’m told. I shouldn’t have to remind you all of his recent injuries – the fractured bone in his face and the concussion history specifically. It’s no surprise the Islanders want to keep DiPietro out for tonight’s contest – or well, until he’s without a doubt 100% healthy.

That pretty much solidify’s Al Montoya in net tonight, as he’s been playing like a number one goalie for the Islanders the last two games – but who will that masked man be behind the bench? None other than the , Evgeni Nabokov.

The speedy and always dangerous Tampa Bay Lightning are visiting town tonight. This team is chock-full ex-Isles – Eric Brewer, Nate Thompson, Dwayne Roloson and Bruno Gervais – who had a goal and assist (no, I am serious) on Monday in his Lightning debut.

You can’t make that stuff up. I’ll be back later for some post game thoughts – be sure to follow alone with the conversation on Twitter – by following @islesblogger!