This post was published 8 years 9 months 14 days ago which may make its content inapplicable to the current Islanders roster and/or team news. This site is not responsible for any misunderstanding.
TweetLikeShareLinkedIn

So we’re just just past the quarter pole of the season and we’ve seen such inconsistency that it’s maddening. Oh to be a fly on the wall of the locker room.

We’ve seen this team come out flying and score goals in the first minute of play and dominate for a full 60, but we’ve also seen the same team come out and look lost and allow goals in the first :27 seconds or less of periods. I’ve seen blame placed upon everything from the owner, to the coach, preparedness, the captain, lack of talent, lack of defense, size – everything.

What are the answers?

That’s a great question. One that I find myself asking as I watch these games from the comfort of my living room with a scowl on my face and sore throat from yelling at the TV. 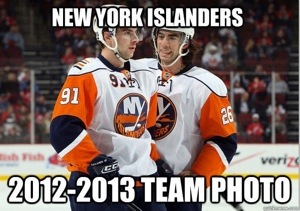 Up front we have Tavares, Moulson and Boyes. While this line has put up points and John has entered beast mode at times, he cannot do it alone. I watch this guy bust his hump game in and game out and teams pay lots of attention to him. Why? Because the talent around him while good, can’t keep pressure off of him most nights. Sure, they can compete with that first line, but he needs someone who can open up space and be as big of a threat as him so he can penetrate the defense without too much trouble and not have four guys hanging all over him.

At the same time, because he draws that many players to him those around him need to get into better position. Something that doesn’t always happen. Moulson gets to the net, creates traffic and is handy with his stick depositing shots – but only when they get through. Boyes shows flashes of being a smart playmaker, but he gets pushed off the puck and causes turnovers at times. I’d really hoped for more out of him and I’m not sure he belongs on JT’s wing.

As we move down the depth chart – we have Grabner who’s speed and defensive play cause fits but he often can’t finish. Nielsen with his defensive play, while he’s a smart player he doesn’t seem to have much as far as offense this season. Bailey has looked better this year, but we haven’t seen enough of him. Ullstrom and Cizikas have been a pleasant surprise. I’d like to see Ullstrom up on JT’s wing for a game or two actually.

Okposo. I’ve never been as disappointed in a player as I have been with Kyle. He seems lazier this year, perhaps because he opted to not play during the lockout and it’s a matter of conditioning? Two games in a row he’s taken penalties that have killed momentum and have been in the offensive zone. You just cannot do that. He’s haphazardly back checked and tried too hard to make pretty plays with the puck. He needs to use his head and slow his game down a touch. He’s been all over the place in the lineup, and last night he looked OK until he decided to be a bonehead.

Aucoin and McDonald – two serviceable guys who deserve spot duty in the NHL, but would be better served down with Bridgeport. Aucoin I’d actually go and say he’s good enough to stick, but I think it’s because of our depth issue.

Reasoner – well, we know what we have there and why the team is shopping him. He actually played ok last night in Ottawa, but as much as this team needs a veteran, he doesn’t fit and hasn’t fit since was signed. Experiment over.

If he’s waived or traded, it’s time for Niederreiter to be called up.

This has been a tough year – as noted by our waiver wire addiction.

Hickey has looked good, I like not noticing a player much until he makes that solid play and he hasn’t looked out of place. Finley, well – we could do better but he serves a purpose when he’s around. Carkner has added toughness and been an ok defenseman and I’m actually a little upset he’s been injured. They need his fire.

Visnovsky has been as advertised. I just wish he was a few years younger because he adds an element that this team needs – a secondary power play QB. He seems to like the team, thankfully – and plays every night. Not to say he hasn’t made mistakes though.

Our Captain, Streit – he’s struggled but has given glimpses of the player he was in his first season on the team. I’ve not changed my mind in that he was a bad choice for captain. He would never do as Giroux did for the Flyers and call out his teammates. He should’ve after the 7-0 shutout though. I would have. Sometimes you need to get pissed as a leader and veteran. Just look at what assistant coach Doug Weight did with his “paint peeling” speech last week. We need THAT fire and excitement.

Strait is hurt and that’s a shame. He’s been solid and deserves that contract. A fractured ankle will likely see him gone the rest of the season. I suppose we’ll see the man-o-glass Martinek replace him this week at some point.

MacDonald – oh what happened to you? You’ve gone from a steady workhorse to someone who’s positional play has gotten away from what it was. You’re playing too many minutes friend.

Hamonic – thank goodness for you. You’re the best we have on the rear guard corps, but like your partner you are playing too many minutes. This just screams lack of depth and poor coaching.

It’s clear to me that Capuano trusts who he trusts and is hesitant to change much up. Sounds exactly the way Scott Gordon was and we know how that ended.

Nabokov has been outstanding for a player creeping up there in age. He’s been overplayed though and hung out to dry more often than not with his defense.

DiPietro – I’ll get lambasted for saying this, but he’s been ok. Not great, not good – but just ok. Sure last night he flubbed that glove save and it put the game out of reach, but when you don’t allow your goalie to see the puck you can’t expect him to automatically make a save, I don’t care who it is in net.

I’ve been writing about this team since 2006, been a fan my entire life and have seen a lot of crazy things go on with the organization.

What I cannot wrap my mind around is the lack of effort by Charles Wang to put a genuine NHL product on the ice. Garth Snow is always forced to assemble a majority of his team with tape and bubble gum and that’s no way to form a contender, let alone a professional hockey team. His hands are tied for the most part – I don’t agree with the thoughts that he’s a bad GM and I’m curious to see how good he can be if he was ACTUALLY free to do what he wants.

Sure there are a ton of issues going on behind the scenes with the pending move to Brooklyn, but enough is enough.

The Islanders are wrecking these years with John Tavares. Plain and simple.

While the farm is stocked with a ton of good prospects – we seem to be stuck in this repetitive cycle of poor management. It’s painful to watch as a fan, I’m sure it’s no better as a player.

We should be going hard as we move towards Brooklyn. The fans in on Long Island deserve to make the old barn rock at least one more time.

I’m tired of feeling as if we’re constantly lied to as a fan base – and I know a lot of other fans out there feel the same way.

I look forward to better days and we’ve been teased with what it’ll be like once we get there.

Tell me you’re feelings or ideas in the comment section. I’m open for debate.