This post was published 8 years 8 months 4 days ago which may make its content inapplicable to the current Islanders roster and/or team news. This site is not responsible for any misunderstanding.
TweetLikeShareLinkedIn 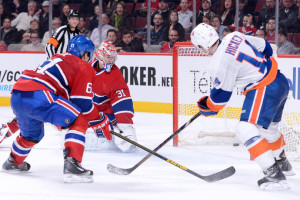 This is a post that I wanted to get out earlier today, but work had me running around like a chicken without a head. It never fails, Friday rolls around and customers tend to freak out about the thought of not having heat before a weekend – especially one where the weather outlook is not good. Did I mention they call within an hour of the days end?

In any case – the Islanders were victorious North of the Border in Montreal last night, but it was a tale of three teams. I’m almost certain that you read the title and said – “Eh? THREE teams Mike?”.

You see, far too many times the last (for a long time…) the Islanders have this dirty little secret. They’re actually two completely different teams. As I mentioned the other day in my most recent post, it seems as though Team A can come out, right from the jump and score early goals or at least generate tons of pressure. They can also sustain this pressure, force turnovers, penalties and generally dominate on both sides of the puck for 60 minutes.

Then we have Team B – and they’re nasty.

Team B, well – they seem to forget that they’re supposed to be professional hockey players. They lack motivation, drive, talent and for the most part – energy. What’s more, they LOVE to allow their opposition scoring chances and worse, early goals. I’ve lost track of how many times in the very short season the opposing team has scored under a minute into the contest. It’s that bad. They also tend to have an issue protecting leads, seeing two, three or even four goal leads erased. Ouch, just nasty stuff.

Last night in Montreal was no different. The Habs got onto the board first barely a minute into the game, even after a great scoring chance by John Tavares off a great feed from Mark Streit. After the first periods horn sounded, they trailed 2-0. Matt Moulson scored on the power play in the second, but the Habs would regain a two goal lead and go ahead 3-1. That’s when things turned around.

Team B, whom for the most part ruled the roost for the Isles, was overcome by Team A and things got interesting. The Islanders were awarded another power play chance, and they found success once again – with Matt Moulson depositing a puck past Price to make it 3-2. In the third period, the Islanders – I mean, Team A continued their strong play and forced the Habs to ice the puck six or seven times. They kept the puck deep on one flurry and had great zone time until a turnover lead to an odd man rush back into their zone. Frans Nielsen skated back to help the lone defenseman and did a heck of a job back checking. The play didn’t end there however, Nielsen passed the puck up through the neutral zone to Josh Bailey who crossed into Habs territory and stopped on a dime. Nielsen went straight to the top of the slot and wired a wrister past Price to tie the game at 3.

The Isles had completed a seemingly impossible comeback and forced overtime. But it wasn’t easy, they had to come up big on the penalty kill in the last minutes of the period. That’s when the magic happened. 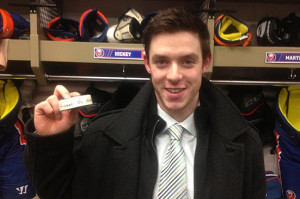 New York Islanders
With a four on four sequence giving plenty of open ice for the Islanders, they found a way through the strong Montreal defense for an overtime win. John Tavares split the Montreal defense and muscled his way to the slot, under pressure he lost an edge and somehow, someway got the puck (from his back mind you) to Grabner who found Thomas Hickey wide open for a an easy deposit into an empty net. Hickey’s goal – the game winner, was his first NHL goal. Welcome to the big leagues!

Despite the win, there are obvious problems. Their five on five play leaves a lot to be desired. Scoring on the man advantage is an important part of winning hockey games, but being able to find the back of the net during even up play is enormously important. Slow starts, motivation or preparedness needs to be remedied. Why work from behind so early in the game? Consistency. Team A and Team B need to have a meeting and decide which team they want to be on a nightly basis. The skill is there, for the most part so I would like to see the same team from night to night, and even more important – period to period.

So you’ve read through this entire post now and are likely asking – what about the third team? Easy, Team C is the opponent, which you likely picked up by this point!