This post was published 9 years 10 months 21 days ago which may make its content inapplicable to the current Islanders roster and/or team news. This site is not responsible for any misunderstanding.
TweetLikeShareLinkedIn 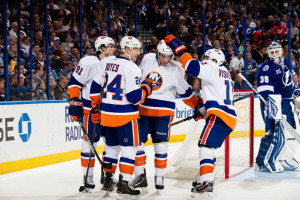 It’s been a crazy few weeks for fans in Islanders country. The team finished off a seven game home stand with strong play and appeared to carry that momentum into their small road trip beating the Capitals, but followed that win up by getting brow beaten by the Sidney Crosby and the Pittsburgh Penguins.

Fortunately for the team, they had a rare four days off in between the Pittsburgh game and their game in Tampa against Stamkos and the Lightning and outworked them to a 2-0 victory on Thursday. The break afforded much needed rest for the team, as well as Evgeni Nabokov who’s been used in most of the teams games thus far.

Tonight’s game in Sunrise Florida against the struggling Panthers is a pivotal game for the Isles. Why is this? Let’s take a look at the standings for a second. 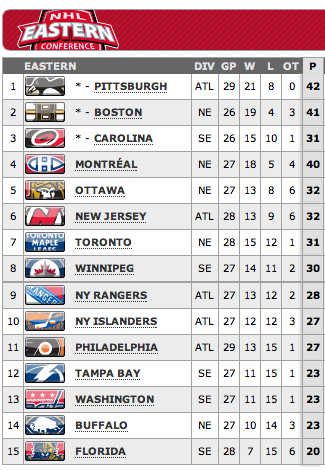 As of right now, the Islanders sit in fourth place in the soon to be former Atlantic division with 27 points. They are just one point back of the Rangers for third and trail the second place Devils by five.

Looking at the bigger picture in the Eastern Conference, the Islanders are in 10th place with their 27 points, one point behind the 9th place Rangers, three behind Winnipeg in the eight spot with 30. But it gets even better. Teams are so bunched up in this shortened season, that the Islanders are within striking distance of as high as fifth place if they continue strong play. The Maple Leafs are in seventh place with 31 points, the Devils in sixth with 32 and the Senators just above them in fifth with 32 as well!

That’s the thing about this Islanders team so far, consistency. I’ve joked numerous times about the team having an identity crisis, or a split personality. We’ve seen them show up for periods, half of games – either early or too late and at times, not at all. It’s been crazy, but then again – it’s an atypical season after all.

Looking ahead at the teams schedule to close out the month of March, the team has a mixed bag of a opponents. They play the Senators, Canadiens, Penguins and Panthers at home and then finish the month on the road against the Capitals, Flyers and Penguins.

Let’s look further and see the record against each team so far this year:

Clearly, the Islanders have some work cut out for them – especially against teams in the state of Philadelphia. They would need to bring the type of game that has made them successful up to this point. The Flyers are beatable and if the Islanders want to make the post season, they MUST win against that team. They also need to avenge their loss to the Penguins as well, and they could even up their season series by that point.

Coming back to the present, the Panthers are 2-6-2 in their last ten games are dead last in the Eastern Conference. Teams like them are dangerous, because they are likely out of contention and have nothing to lose. They will be hungry and try to make the Islanders leave Florida with the loss. It’s also going to be tough due to injuries. Ullstrom and Grabner are both out. Ullstrom injured his groin in Tampa on Thursday and will be out for the next few weeks, Grabner hurt his shoulder earlier in the week and will be back in 2-3 weeks.

The Islanders have not recalled anyone, Joensuu has traveled with the team and is close to returning from his sports hernia operation but is said to NOT be ready to play tonight. That’s a shame because they can certainly use his size and skill up front. Arthur Staple of Newsday, sent out this tweet earlier today:

Looks as though McDonald back in, Joensuu still out. Same D as Thursday. #Isles

Colin McDonald back in – fresh off his two year, one-way contract extension with the Islanders. Details of that contract, as well as a great write up, are available on the Islanders website.

So it’s clear that Capuano is comfortable with his lineup from Thursday, but how will the team fare without Ullstrom in the lineup? I guess we are a few hours away from finding that out, aren’t we?

What do you think? Let me know about it in the comment section, or hit me up on Twitter – @islesblogger