This post was published 9 years 9 months 19 days ago which may make its content inapplicable to the current Islanders roster and/or team news. This site is not responsible for any misunderstanding.
TweetLikeShareLinkedIn 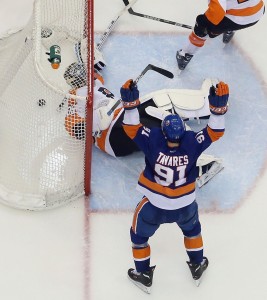 How about these Islanders?

I made it to the game on Tuesday night, the first time this season. Not that I haven’t wanted to go earlier, I have been crazy busy during this shortened season.

From the second we pulled up to the parking, you knew that hockey was back on Long Island. Yes, it’s been back since January when the lockout ended – but it’s BACK these days. We sat in traffic just to pay for parking and had to park near Hempstead Turnpike do to the turnout. The last time that happened was my first as a season ticket holder, in 2006-2007.

It was a beautiful night Tuesday night, so many fans did as they always have during early and late season games – they tailgated. There was a buzz among the crowd, an hour before the puck was even dropped!

Inside, fans were just as plentiful – a far cry from some of the earlier games this season.

Earlier on, the Islanders struggled mightily at home, the team had been dubbed (and even dubbed themselves) “Road Warriors” because they played great away from the Coliseum, but that’s all behind them now. They continue their strong play both on the road, and now at home as well. The most important statistic, isn’t a stat at all – the Islanders are making noise and are very relevant in April. It’s been a long time since this was true.

As I said, fans certainly notice when the team plays well. It was literally a night where you had to sit on the edge of your seat because you knew they wanted to beat the Flyers at home. As any fan who’s ever been to the Coliseum knows – the building got LOUD! Another memory forever burned into my brain – the “We Want Playoffs” chant that sprung up in the final five minutes. It gives you chills when the fans back the Islanders like this. CHILLS.

What’s more, media coverage has increased. When you win, it seems fans aren’t the only ones who notice. I do a ton of driving for work, and as of late I’ve listened to the NHL Network on Sirius/XM. Daily mentions have increased, with several minutes often being devoted to discuss what’s happening on Long Island. It’s an exciting time to be an Islanders fan again, for sure.

Fast forward to tonight, a road game against the bigger, tougher and stronger Boston Bruins. The Islanders made the Bruins look silly at times on their forecheck. They chipped pucks deep, initiated contact like they have during this great stretch of hockey and willed their way to a 2-1 win over the B’s. Nabakov was fantastic, as was the Islanders defense. Thomas Hickey has really grown into a reliable top six d-man as of late, it makes you wonder what his true ceiling can be.

Going into Saturday’s home tilt against the rival New York Rangers, owners of the Eight playoff spot as of this post – is certainly expected to be even louder at the old barn. It’s been a long time since the place rocked and I cannot wait to see how long we can keep it rocking.

The Islanders certainly believe – do you? We’ll see in just two days time, and I know I cannot wait.