This post was published 7 years 3 months 16 days ago which may make its content inapplicable to the current Islanders roster and/or team news. This site is not responsible for any misunderstanding.
TweetLikeShareLinkedIn

Reports out of practice this morning, by both Artur Staple and the New York Islanders have goaltender Jaroslav Halak and defenseman Thomas Hickey practicing with the full squad.

Hickey, who’s been nursing a finger fracture and Halak a mysterious upper body type injury – have missed the first three games for the Islanders, including the Barclays Home Opener. 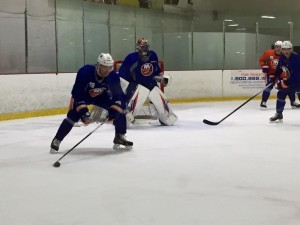 While the Isles have made due without both of these players, having your number one net minder and a key pivot on the back end close to returning can only help. That’s not to say Greiss hasn’t played well in his two starts, posting a respectable .915 save percentage and a 2.46 goals against average.

The Islanders certainly bounced back after their second game against the Blackhwaks with a strong, spirited matinee win over the Winnipeg Jets on Monday.

I’ve only gotten to see highlights of the last two games, but it looks like the team is on the right path, I’ll reevaluate after Thursday’s matchup with the 3-0 Predators when they come to town.