This post was published 7 years 3 months 14 days ago which may make its content inapplicable to the current Islanders roster and/or team news. This site is not responsible for any misunderstanding.
TweetLikeShareLinkedIn 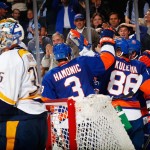 What could’ve been the Islanders second loss of the season, fortunately managed to become their second win. It may not have been the prettiest of wins, but it was a big one. All this despite the Predators coming to town with a 3-0 record, despite being grossly outshot 47-28, despite being 0/2 on the man advantage and even, despite giving up a late goal.

We all know how well the Islanders played and protected leads last season, but it’s with growing confidence I can say that may be a thing of the past.

The ice at the Barclays Center looked the same as it has the last few games – slow, soft and slushy. I understand that the arena personnel there are new to this ice maintainence routine and that the arena is like MSG with a lot of events, but this is a situation that bears watching long term.

There were a few positive takeaways from the game however – the Islanders were fairly physical against their opponent, out hitting them 43-33. At times the Isles did what made them so successful last season, were strong on the forecheck and puck retrieval. Three of their four goals came off plays where they forechecked hard, either causing a turnover or kept the play in the zone and were able to score off rebounds or plays down low.

Surprisingly, both teams were even in draws, but watching I felt that the Islanders were the weaker of two teams.

The Islanders had scoring from all kinds of players – their first line combined for 5 points (Lee with Goal, Assist – Tavares Goal, Assist and Strome Assist) the second line, also with 5 points (Okposo Goal, Grabovski 2 Assists, Kulemin Goal, Nelson Assist). All told the Islanders had 8 different players on the scoresheet, not too bad offensively. When you have two lines going, it’s going to be harder to stop you.

Some negatives, the Isles seemed to scramble in their own zone at times. Zidlicky tried to clear the puck from the crease and hit the post, scoring on his own net. There was also a few occasions where they could not clear the crease in front of Greiss, which was evident on the third goal. The Islanders felt there was contact by a Predator player in the crease and used a coaches challenge for the first time this season, but were unsuccessful in their case. While this burned their timeout, the team got an extended rest during the review process – so it was a smart gamble by Capuano. It’s something we could see more of in those situations throughout the season for sure. Lastly, Brian Strait – paired with Zidlicky. That’s all I need to say there.

Ultimately, this was a confidence builder for the Islanders – a strong team came to town and the Islanders played them well enough to win even though it wasn’t their best performance. The season is still young, but it’s games like this that will matter come April. They face a similar opponent in the San Jose Sharks tomorrow night, they need to play a stronger, more physical game – if they want to come away with two more points.