This post was published 4 years 9 months 20 days ago which may make its content inapplicable to the current Islanders roster and/or team news. This site is not responsible for any misunderstanding.
TweetLikeShareLinkedIn 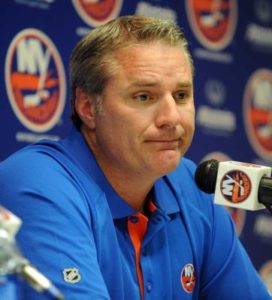 For the last two days, the hockey world has seen an abundance of trade speculation and opinion surrounding the New York Islanders. There seems to be a unifying rally cry by fans and experts alike on how the Isles should be looking for defensive help outside the organization.

I know I’ve been absent for a long time, and this being my second piece in as many days – I am humbled by the activity here and on Twitter where I’ve made sure to maintain my voice. I plan on writing regularly here on out and tidying things up on the site as well.

That said, let’s move into the nitty gritty, shall we?

Garth Snow, for all the praise I’ve spoken about him over the years has become extremely frustrating to me. Year after year we hear the same statements: “We kicked some tires”, “Prices were too high”, “We are happy with our roster”, and now this years “I will not trade high end picks for rental players” (I’m paraphrasing because the exact wording doesn’t matter). Why doesn’t it matter? Because it’s both hogwash and yet, almost understandable. Indefensible yet understandable.

Allow me to explain, but after the exact quotes from yesterday’s article in Newsday (paywall).

“We have obviously two first-round picks, two second-round picks . . . We’re a team that’s right on the edge of getting in the playoffs and not being in the playoffs. So, are we going to at this point in time, be giving first round picks and high picks for rental players? I don’t think we’re in that position. Just doesn’t make sense.”

This is all correct. We have what could be at least one lottery pick should things fall off the rails (our own) and we have Calgary’s first as well via the Hamonic trade – but they’re in fourth in their division and things would really need to go south for this pick to also become a lottery pick. Throw in the Tavares unknown and do you want to throw those two firsts away for a rental? I don’t and wouldn’t either. That said, Snow doesn’t mention trading one or a combination of picks and players for a player WITH TERM left on their contract. But that’s just my interpretation.

Snow, and Weight later in the article both go on to reference injures as the main catalyst to their defensive and playoff position problems as of late.

Snow did point to injuries as being “one hundred percent’’ the reason why the Islanders are in a precarious position for the playoffs. “Not making excuses, I’m stating a fact,’’ he said referring to season-ending injuries to Calvin de Haan and highly regarded prospect Devon Toews. Johnny Boychuk may be close to returning after an absence of over a month, but Scott Mayfield will be out a minimum of four weeks, Doug Weight said, with a lower-body injury sustained after blocking a slap shot by the Predators’ P.K. Subban on Monday.

I should note that this is probably the most frustrating aspect of the teams current issue. Here’s why: De Haan, Boychuk and now Mayfield are all injured with the big club. Down in Bridgeport is no different: Aho is already up with the Islanders, but Toews, a top defensive prospect is out for the season. Reports the other night out of Bridgeport have Vande Sompel injured as well. That leaves little options on the farm for immediate help – can you chance calling up Wortherspoon or Lafranchise or PIM leader Helgeson? How about the big boy in Burroughs? I suppose – true though truth be told I am too unfamiliar with all four, but know Wotherspoon has upside based on reports of rookie camps. Can they help as of today though?

Garth Snow has always been extremely friendly to me when I covered the team regularly, and for that I’m thankful. I know he’s rebuilt our franchise’s stock of prospects and repaired the damage Milbury left us with, but this is virtually year 12 of a rebuild and the franchise only has one playoff round win in his tenure. In a year where our franchise player (THE franchise player) is in his walk year I am left with too many questions and a general feeling of uneasiness with Snow at the helm. I know I’m not alone, but it makes me question John Ledecky’s vision too a bit – loyalty is great in business but not when you’re loyal to a fault as this has shades of.

Winning changes everything, but we are still left waiting, and wanting.At least until something changes, and that’s got a really slim chance of happening. Everything rides on Garth’s reluctance. Everything.