This post was published 4 years 9 months 17 days ago which may make its content inapplicable to the current Islanders roster and/or team news. This site is not responsible for any misunderstanding.
TweetLikeShareLinkedIn 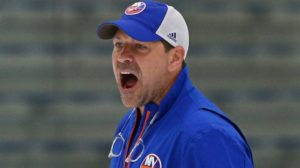 You’re probably reading this and still have a splitting headache from the frustrating things coming out of the Islanders performances the last two games. I know my blood pressure has been insanely elevated just watching on TV.

Mix in what head coach Doug Weight said after the game last night, and I’m sure it spiked even higher for everyone else as well.

Let’s get into it.

We’ve all looked at systems. We’ve looked at personnel. We’ve looked at injuries. We’ve even looked at analytics! We can look at lots of aspects trying to find answers as to what’s causing the issues with the team right now. What if it’s something we’ve been overlooking completely?

We know that Barzal has been benched for stretches of the last two games, including some important minutes late in a game trailing a goal. Yes, he is a rookie (he’s actually the best rookie in the league right now, but I digress). Is Weight holding him accountable because he’s a rookie, or because he’s one of the best players? Good question. Perhaps its a teachable moment and nothing more. That’s on Weight, as much as I disagree with the need right now.

What makes things extremely frustrating is you have veterans like Jason Chimera who turns the puck over and hardly contributes to much when he’s on the ice. He is a shell of what he was last season for the Islanders, and before that with the Washington Capitals. Why isn’t he being held accountable? Why is he given a pass for playing time or simply receiving a steady shift?

Alan Quine, Shane Prince, Denis Seidenberg – they’re all scratches. Have they finally begun to be held accountable or is their sitting the result of other players not being held accountable?

Is Doug Weight and his staff being held accountable by management?

Is Garth Snow being held accountable by ownership?

Weight sure made it known he’s holding fans accountable last night! That’s just an area that you don’t go as a head coach, especially in a feisty New York/Metro Area market. But why hold FANS accountable for actions we all have zero control over. Are we expected to root and cheer for a team and system that has been flawed, in some cases our entire lives? That leaves a horrible taste in my mouth, and honestly him strolling out before the cameras last night without a tie, looking beaten and wearing an Islanders warm up jacket wreaks of unprofessionalism and of a man who has nothing left.

I used to like Weight a lot. He had charisma, he had a fire inside – he loves to win and is a fierce competitor. So what happened? Where’d that guy go?

Lot’s of questions all around, right?

Exhibit B: Lack of Experience

Doug Weight let’s not forget (and this isn’t a free pass) is in his first full season as a head coach in the NHL. He was successful in his interim basis last season, mainly because of the in-season switch. The team responded to him because they liked him, respected him and also because teams generally rally around the new guy in those situations.

There were a bunch of changes in his staff, as well during the summer.

Richardson has three seasons of being an assistant coach in the NHL. Buchburger has six. Gomez, as much as he’s an “assistant from above” and not behind the bench, had zero experience prior to this season. And then, we have Brathwaite – whom only experience as a goaltending coach was with the Canadian National under-18 teams for three seasons. Let that sink in.

From top to bottom, the coaching staff as a whole, has minimal NHL experience outside of Greg Cronin – who’s been with the Islanders and Soundtigers organizations since 1998.

Is it any coincidence that the Islanders goaltending has struggled? Perhaps – I’m wholly unfamiliar with Brathwaite to give an honest assessment but it makes me raise an eyebrow.

What about systems in general? I’d point to an honest yes here, only because Weight inherited systems in place via Jack Capuano – especially because Cronin has been part of the mix for the last decade plus. I know Richardson was well received in Ottawa and was viewed upon as a big loss for that organization.

And then….we have the players.

The following list is players who by and large, are “new”:

Pelech and Beauvillier are the two with the most games played, but they both saw limited time under Capuano, which is why their games played are inflated. Pullock for all intents and purposes, is a rookie this year right along with Aho and Barzal. Heck, practically all of these guys are rookies in the grand scheme of things.

For the last several games, I have seen a ton of rookie mistakes – which is understandable given their total NHL experience. One major standout is the defensive play of Beauvillier. When Justin Bourne posted his systems post on The Athletic last week – there were several instances where he pointed out that Beau failed to do what he needed to do to cover his man. The last two games were exactly the same, especially out on the penalty kill.

I hate picking on players because overall Beauvillier has been playing well offensively – but to make it in this league you have to be responsible in both ends of the ice.

Looking at the defensive corps, there’s so little experience here that it makes me cringe. Again each of the players listed has played ok – but collectively you are forced to wonder if they can handle the workload they are given. Is there any other team in the league that has four rookie defencemen? I doubt it.

All told, the Islanders are a flawed team. They are weak defensively and need more veteran leadership on the blue line. They are flawed in net, be it poor coaching or the result of horrible defense or systems – I don’t even really completely blame Halak or Greiss given all of the above. But still the biggest question: Accountability, Experience – or even both?

Most importantly, they are flawed in their coaching staff as well. Rookie NHL coaches CAN succeed if given the right situation or supportive cast – but what is it that they have?

Until it’s proven otherwise – it’s the wrong one. How long will they be given? Only management knows that, and we know that’s a completely different flaw.