This post was published 4 years 11 months 9 days ago which may make its content inapplicable to the current Islanders roster and/or team news. This site is not responsible for any misunderstanding.
TweetLikeShareLinkedIn 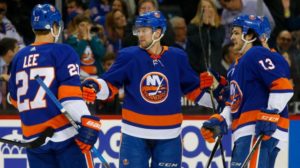 As far as NHL Trade Deadlines go, 2018 came and went without much fanfare throughout the league, especially for the New York Islanders. Caught in the middle of a “where are we/who are we” type of a season, (or as Arthur Staple said in his post on The Athletic, “The Mushy Middle”) it’s really no surprise that Garth Snow did nothing more than due diligence and kicked a few tires around the league.

Just two points out of the second wild card spot, just behind the Columbus Blue Jackets (who as I write this are up by a score of 3-1) – they weren’t sellers, and not exactly buyers either. Let’s analyze what did happen.

Snow decided to extend Josh Bailey over the weekend for 6 years and $30-million with an AAV of $5-million per season. Locking Bailey up, a career New York Islander for under what he would have fetched as a pending unrestricted free agent to me, at least – was a good move. Bailey has been a serviceable forward and has finally matured into the player he was expected to become when he was drafted in 2008. It keeps two thirds of the first line intact and, the hope is – entices John Tavares to resign with the Islanders come July 1st.

Reports, and really just speculation – have been running rampant on what Tavares plans to do. However, there was an article in Newsday this afternoon that claims JT isn’t ruling out resigning with the team before he hits free agency. One could always hope that’s the case.

Per the Newsday Article:

Asked if he would not re-sign before the conclusion of this season, Tavares said, “I wouldn’t say it’s a foregone conclusion. There’s no question my focus mostly right now is to help the team get to the playoffs. And obviously, we’re right in the thick of things.”

The team also picked up Defenseman Brendan Davidson from the Edmonton Oilers for a 3rd round draft pick in 2019. Davidson supposedly has great fancy stat metrics, being a shot blocker, uses his body and is a good penalty killer – three areas that the Islanders could sorely use right now. Adding to the theme, the Islanders shipped out a struggling Jason Chimera to Anaheim this afternoon in a deadline deal for winger Chris Wagner. Wagner is known as a high energy guy who can also play center and is good at killing penalties. Browsing the message boards, it appears fans of both teams are a little miffed, but Billy Jaffe (hey remember him?) Tweeted this out earlier regarding Wagner:

He also has some great things to say on the Islanders website that’s worth a quick read. He knows the Islanders are on the outside looking in right now, but he wants to help put them over the edge.

While these moves don’t equal the moves the other teams in the Metro division have made, the Islanders didn’t lose any major pieces. They’ve played frustratingly good the last three games, but have come away with just one point. I am certainly not drinking the kool-aid or giving anyone a pass, the time to make moves was over the summer and when the team began to falter.

All these moves can do from here on out, is make the team a little more solid defensively and hope to continue to be a part of the conversation. But my guess is they will wind up missing out, right on the wire. Status quo around here unfortunately.