This post was published 4 years 7 months 9 days ago which may make its content inapplicable to the current Islanders roster and/or team news. This site is not responsible for any misunderstanding.
TweetLikeShareLinkedIn 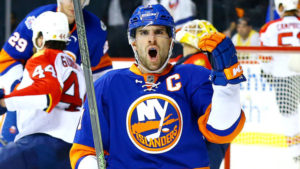 NHL
If you would have told me, 9 years after John Tavares’s first overall selection by the New York Islanders in Montreal – that I would have similar feelings of anxiety and nervousness I would tell you you’re crazy. But, here we are.

That night back in 2009 was a special night for me. It was my second of what would be three years attending the NHL Entry Draft and I was going through a rough time personally. As I sat amongst the press rows of the Bell Centre – it felt amazing to sit in a city with a storied past. I felt rushes of all sorts of emotions as I took in all the sights and sounds of the first round of the draft. The fans were going absolutely crazy, and the arena was loud.

To make matters worse, as we all know the Islanders had the first overall selection and there was a ton of speculation surrounding what the Isles and more importantly – Garth Snow would do with the pick. I wrote right here in this space about numerous rumors, and rampant suggestions via the Toronto based media.

In the end, Garth did what we had all hoped and eased my own personal anxiety by selection John Tavares first overall. I would go on to interview the young man we have all come to love and respect later on in the night. And like you all, watch him grow into a man and more importantly an elite player who’s grown beyond what our expecations could’ve ever been.

Fast forward to 2018 and the anxiety has returned.

The last week has been a rollercoaster ride – it really has. Tavares has been camped out in his agents office in Los Angeles as Pat Brisson has entertained six teams in person, and perhaps more via telephone. We’ve been subjected again to the rampant speculation and click-baity reporting via the Toronto based media. We’ve heard why John would be best served signing with any franchise not named his New York Islanders. They are, after all HIS team – he is their captain until Midnight on June 30th. Remember that date.

But what can we do as fans? This is another one of those situations where we can hope for the best and split a path of what life would be without John Tavares and continue to hope for life with John Tavares.

To me, he’s earned this right at this point to hear things out. I know if I found myself in his shoes I would want to do all my homework as well, so I cannot really blame him there. I speculated a bit though, on my Twitter just how far John himself would’ve liked to take this and if much of this can be attributed to his agent. We all know that John is very much an NHLPA union guy – and the union has fought for the concession of the listening period. This entire “saga” benefits more than just JT. It helps players who may not have stability, find stability. It sets the tone and value of similar contracts moving forward. It also helps his agents agency (CAA), have exposure to future clientel.

After hearing from these six teams – The Maple Leafs, Islanders, Bruins, Sharks, Lightning and Stars, John Tavares may have found out what it’s like to be loved from another. To know what his value really is outside of the only organization he’s known. He could’ve also learned that with all the changes that have been made to the organization the last few weeks – the Islanders are his best option.

We don’t know what happened behind closed doors leading up to the managerial and coaching changes with the Islanders, much as we don’t know what discussions have taken place at CAA Headquarters in Los Angeles. What we do know, is that John Tavares must decide on his fate with the Islanders prior to midnight on June 30th, or he will lose that eight year he can only receive from his current club. As of this writing, the speculation says that the eight year deal would be in the ballpark of $88-million – but it could push even higher.

The stage has been set. Hopefully that stage will be on Long Island in the coming days – with John Tavares surrounded by his new General Manager Lou Lamoriello and Head Coach Barry Trotz along with all of his enduring fans.

Maybe then, we can all breathe a sigh of relief and put this behind us and focus on the road ahead. The road to stability, accountability, respectability – and a winning franchise.