This post was published 4 years 7 months 8 days ago which may make its content inapplicable to the current Islanders roster and/or team news. This site is not responsible for any misunderstanding.
TweetLikeShareLinkedIn 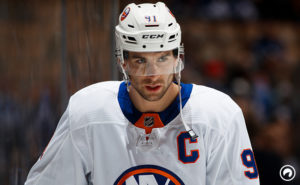 Michael Schuerlein | Islesblogger
As we near zero hour for John Tavares making his decision, fans across the internet hang on every single report and Tweet that has anything to do with what the Islanders perhaps soon-to-be former Captain will do. Will he stay? Will he leave for greener pastures? Nobody seems to know, but many are speculating.

What we do know, is that Tavares was presented an offer by the Islanders – a formal offer. He was also pitched on the plans by at least five rival clubs throughout the league. Lastly, we know without a doubt, that he flew home to Toronto to mull things over and enjoy his holiday weekend at home surrounded by his family.

The rest, pure speculation at this point. With that being said, I heard rumblings that the Islanders will hear from the Tavares camp in one form or another by this evening.

I know I am pretty tired of reading the wreckless “journalism” the last few days – rampant with blind homerism and just flat out speculation. So I wanted to do things a little different. Since I started writing in 2007, I have made a pretty fair amount of contacts with fellow bloggers and members of the mainstream media as well.

These folks work in all types of media being from print, digital and even radio. Some are general sports reporters and others focus on hockey. That being said, this is all came off the record – so they’ll be anonymous. I swear, this is real – and you can trust me.

I opened all my questions the same in that I was reaching out to members of the media that I know and respect and wanted to poll them on their thoughts on what JT would ultimately do. And if the recent front office changes would have a negative effect on things. Here are the answers.

Reaching out to one of the first people for my poll, I was given a swift reply of simply “Sharks”. I asked if any of the management changes or coaching changes would have an effect on JT and was told “I wouldn’t think so”.

Reached out to a friend in another market who’s writing I love, and when presented with the same question replied with “My gut says he stays, but if he goes – SJ [San Jose]”. When I asked if he had heard any rumblings on the front office changes I got a similar reply “Haven’t heard much on that side”.

Chirped up another writer from the Northeast that I haven’t seen in a long time. I must still have some clout because I got a quick reply again. Got a pretty detailed answer this time when I asked his thoughts “My opinion is that he will tell 2-3 teams they’re out today but not sure it will go public. Who those teams are? I can’t say right now but I think the Isles are still in it, unlike many who say they’re done.”

Moving on I heard back from someone well known through my circles and got a pretty confident answer – but again, off the record. When asked the same question they replied “Tough question since there has been lots of speculation. I’ll sit at 40% he stays and 60% he goes.” When pressed for further thoughts – I was told they believe he will wind up in San Jose.

Pinged a big radio guy, won’t say the station or country – but again was replied back to pretty quickly – requested off the record and it was one of the longest answers yet. “That’s the biggest question, isn’t it? Here’s my take on it. He met with 6 teams, I believe the list is down to 3 and it was closer to being down to 3 even before the 6 team one on one’s (NYI, TOR, SJS). He [JT] said recently “You want to win and want to compete for the Stanley Cup and where I am playing and where I am living goes into anyone’s decision into where they are playing.” So, if he wants to be comfortable, he is either going to take NYI or TOR based on his family, living situation, etc. Therefore, I would find it hard to believe that he would head to TB, SJ, DAL and even BOS (The closest of all teams to where he is). Now, he wants to win…based on the 4 teams I have on my list SJ and TOR are closer to winning than NYI with the parts they have in place already. Not to say the Isles can’t be in that spot after this off-season. So, now its down to two – NYI and TOR. He can get an 8 year deal with NY – no other team. I don’t think thats an issue for hi and neither is money as he will get paid. So, after crossing iff everything from the list, I am leaning toward him announcing that he will sign with Toronto. I know Isles fans want him, every team would like to have him. Think family is a HUGE part of this choice.”

When I pressed the San Jose angle I was told “Interesting, he could just head that way for sure. He is very good at keeping things quiet and in a situation like this, he has every right to.”

Score is 2-2 between NYI and SJ, but somehow TML scored a goal here.

When you step back and look at the entire picture, it’s hard to imagine Tavares going home to Toronto knowing the type of person he is – which the point is driven home on my next polled media member. This is a person I have come to know since my days traveling around on my own dime covering the Isles. When I asked this person the same questions I was shocked at the answer “It hard to imagine, after everything he’s said [JT] he doesn’t stay, but this process is troubling.” I pressed for more, “Like I said, hard for me to not see him back on the Island, but if not, than SJ.”

Score is now 3-2 Isles, with a goal from Leafs

As we move through the various media members I’ve reached out to – I come to this person. It’s someone I’ve sat down, broken bread with and even tailgated at the Coliseum with. I wish I could tell you who it is, because they’re genuinely a great person – but alas, they wish to remain anonymous. When I asked their thoughts, “I think he’s gone. I know nobody knows anything but this is taking too damn long and I’ve heard too many rumblings from reliable people. I pray it’s SJ, just get the [expletive] away from us.”

As we near the end of this little adventure, or even path away from conjecture we will call it – I managed to get a few people to talk on record. The first of which was Dom, over at the always awesome Lighthouse Hockey! He wanted me to preface this interview with my own opinion of “that guy knows nothing…” whatever that means. I digress – onto the good stuff.

When I asked Dom he said he was like the rest of us, really “Ha! I have no idea, yet still I say 50/50 but each hour that passes makes me think his eyes are cast somewhere else.” When I mentioned that a majority of those interviewed had SJ as the consensus pick he added “Of course. SJ is curious to me. If TB could at all make it work in the cap, hockey-wise that’s where I’d go. Maybe lifestyle choice is SJ, though.” Maybe he does know a thing or two after all. Make sure you head over to Lighthouse Hockey to join their always amazing coverage and discussions.

Lastly, we move onto Detroit – an area that’s seen stars come and go and also experience a long period of success that ended recently. George Malik from the Malik Report was nice enough to throw his hat into my circus, I mean poll. George is another guy whom I have a pretty long history with – we met in 2008 through various NHL events that kicked off with the NHL Entry draft and have kept in touch. When I asked him what his thoughts were on all of this he said “I think that Tavares is a franchise player–not necessarily a “generational talent,” but close–and in this league, when you can score 60-80 points on a regular basis, and provide leadership and grit, you’re a special player. He’s going to impress whoever lands him. I hope he remains with the Isles, but that’s just me.” Again, I pressed for more and explained my current findings. He added, “I honestly think he’s going to stay with the Islanders, but I wouldn’t be surprised if the Sharks or Stars sway him. I don’t know if he’s keen on playing in a zoo like Toronto.” You can read the rest of what George thinks about his Red Wings or the league in general on his site The Malik Report.

We end this thing tied, 4-4 with that odd goal from Toronto

If you want to add your own opinion to this, feel free to do so in the comments or by following me on Twitter – @islesblogger

I will continue to update this poll should I hear back from those who didn’t get back to me at the time of this writing. So enjoy the rest of the day, and try to steer clear of any drama that unfolds throughout the day. Godspeed friends. Godspeed.