This post was published 4 years 7 months 4 days ago which may make its content inapplicable to the current Islanders roster and/or team news. This site is not responsible for any misunderstanding.
TweetLikeShareLinkedIn 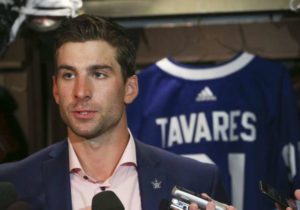 There’s absolutely no sugarcoating the main point now that everyone has had a few days to digest and in some cases – mourn the loss of John Tavares. It’s an extremely difficult time for the New York Islanders and their fans. While John is still very much alive and healthy, he has been labled as “dead to me” by just about everyone who was once a fan.

Any time you lose a player of Tavares’s ilk – a franchise center, the face of a franchise, it doesn’t matter which team it is the pain runs deep and the loss leaves a tremendous hole. This is driven home by the act of the removal of any trace of John Tavares from the teams training facility, and the statement by the Islanders GM, Lou Lamoriello.

The Islanders are slightly fortunate in that they appear to have the makings of another franchise center in the Calder Winning Rookie Mat Barzal. The ceiling is extremely high for him, despite many differing opinions on how he will perform as a true number one center, as opposed to being a number two behind Tavares. I don’t really feel it’ll be a huge issue, as I read he actually was seeing more minutes against top opponents and power play time over John, so time will tell.

Another point or even points, Anthony Beauvillier, Anders Lee, Josh Bailey and Jordan Eberle all had very good years offensively – the whole team did really. Scoring hasn’t been the issue and losing out on his 84 points will definitely hurt – but it can be made up for. Then you look at the growing prospect pool, things will eventually be OK and it’s not just me saying that either.

I spent the day yesterday trying to pick up the pieces so to speak. Sunday was a very exhausting day full of crazy emotions and shock, as you all know first hand. I reached out to a few folks around the league and even interviewed two former New York Islanders. All told, Roger Luce one half of the WBAB Morning Show’s “Roger and JP” was nice enough to share a few thoughts, as well as Greg Wyshynski of ESPN (who I also sat down and was interviewed by – link here), Mark Parrish, Justin Bourne of The Athletic, Andy Graziano who writes for WFAN, Dom from Lighthouse Hockey, Ryan Paton from Sirius/XM NHL Network Radio, Katie Strang also of The Athletic and finally Mike Carver one half of the duo from The Isles Seat Podcast and also of CBS Radio. I have literally received so much from so many people, that it was impossible to fit everything into one post. This is Part One of the adventure.

Roger Luce, (who in addition to his radio show is also the arena PA announcer for the Islanders) was traveling yesterday, but like many of us he shared our dread over the loss “I’m totally bummed JT chose Toronto, but this is sports. So, I always try to be the glass half-full guy.” Former New York Islanders forward Mark Parrish agrees “It stings when a beloved player decides to go somewhere else. Especially when he’s the captain and the teams best player.” “No doubt this one hurts” added Ryan Paton of SiriusXM NHL Network Radio, “Simply put, the franchise player walked for nothing, it hurts even more when the team has nothing to show for it”. The Islanders, as I mentioned do have a few younger players ready to fill larger roles – especially “The Kid who won The Calder” as JT described him.

Justin Bourne, himself a former NHL player and son of Islanders great Bob Bourne said “I think all you can do is sell it as a fresh start. Unfortunately the team, which has talent, didn’t win while JT was there. Sell it as a chance for someone new to have a bigger role, have other voices heard more.” Justin’s position is especially unique too, being a brief part of the New York Islanders, and video coach for Toronto/Marlies added “Certainly the guys will never look at JT leaving as a good thing, but maybe you point to Vegas. Don’t necessarily need a star if the group all comes together.” Parrish echos this sentiment “As far as the room goes, this is where the vets and the leaders step up and use this as a rallying point.” A rallying point – a call to arms, much like the Golden Misfits moniker that The Golden Knights rallied behind to make the Stanley Cup Final in their inaugural season. Teams do rally in the face of adversity.

ESPN’s Greg Wyshynski said that there are positives for fans to look forward to “Mathew Barzal and Anthony Beauvillier are players, with the former potentially a franchise talent. There’s hope in Kieffer Bellows. There’s hope in Linus Söderström, and especially Ilya Sorokin, in goal. There’s hope that Oliver Wahlstrom can be much better than the sum of his goal highlights.” Adds Paton “It is now Barzal’s team, as young as he is.” Parrish has a positive outlook as well “But the silver lining is there are is a lot of young talent on LI, a proven winner at head coach, and GM. It stings now but, there is still plenty of good things happening on Long Island.” He says of the Islanders youth “Focus on those players instead of one player going elsewhere.” There’s a lot of truth to that statement.

In my eyes, the opening of important roles and minutes can only lead to the next step for certain players, especially those who’ve shown glimpses of being the real deal. Throw in adversity and a rallying point and these players can sometimes lift themselves up in that sense – I asked if Barzal and Beaullivier were capable of this. Parrish thinks so

“It’s a tremendous opportunity for a player or multiple players to step up and show what they can do and take on a bigger role that doesn’t come along everyday.” – Mark Parrish, Former New York Islander

“It’s a tremendous opportunity for a player or multiple players to step up and show what they can do and take on a bigger role that doesn’t come along everyday.” Bourne adds “It’s certainly possible they could rise up, different people do respond differently to being asked to take on more.” While Luce takes a slightly different path “I am looking for someone else to step up in a big way and surprise us!” We will close on Barzal with this last bit from Mike Carver “I think Barzal definitely can, the kid who won the Calder knows he’s good and doesn’t seem scared at anything.” He added on Beau “I like Beau, but I need to see him continue to improve off last year.”

When you look at all the positives it’s just like what I said on Twitter yesterday “The clouds are beginning to clear, and it’s a beautiful sunrise in Isles Country. We can all make it through this together. I hope it’s the last time we have to endure this type of pain together.” Luce closed with something just as poetic, and it’s how we will end Part One “I’m hoping we’ll rise from the “ashes” of this situation like a Phoenix and one day look back on this as the beginning of the next road to the cup.” I think we all share this hope.

Come back tomorrow for thoughts on Lou Lamiorello and what his next plays could be, Barry Trotz and his ability to turn rosters around, jersey burnings and what John Tavares was like behind the scenes.