This post was published 4 years 6 months 29 days ago which may make its content inapplicable to the current Islanders roster and/or team news. This site is not responsible for any misunderstanding.
TweetLikeShareLinkedIn 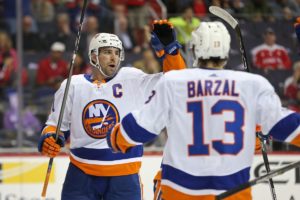 Geoff Burke-USA TODAY Sports
As we continue to heal and clean up the mess left behind by the departure of our now former franchise forward John Tavares, we will examine a variety of topics and opinions by members of the media and former players. If you missed Part One of this multipart story, please go ahead and check that out first.

In Part One, we heard a bunch of positives about what the future would be like on Long Island from former NHL players (and Islanders) Mark Parrish and Justin Bourne, we also hear from WBAB’s Roger Luce, Sirus XM NHL Network Radio’s Ryan Paton, ESPN’s Greg Wyshynski, The Isle Seat’s Mike Carver. Today we will learn what John was like when he was just coming into the league, discuss Lou Lamoriello as GM and Barry Trotz as head coach. We’ll also discuss free agency signings and recent trades.

We begin Part Two with a few thoughts from Katie Strang who was the Newsday beat writer when John Tavares was selected first overall by the Islanders. She then moved on to write for ESPN covering all of the Tri-State area teams before moving over to where she currently writes at The Athletic. Strang, on the rookie John Tavares “I am not sure I came across a more precocious athlete” and that from the start “had such a keen awareness of what he meant to the franchise”. Cleary John embraced this during his early Islander tenure, and this was backed up as Strang continued “He knew what was expected of him, and what sort of responsibility that bestowed.” Something we can all agree that he walked away from on July 1st.

While we have all come to accept, mostly, that he left the team high and dry Strang points out that John handled the pressure of being a franchise player who didn’t exactly get the support he should have by saying he shouldered it “with grace and without complaint for years, and through some very difficult times for the organization.” A sad reality of what was a great 9 years in blue and orange.

Team building, never a concept that former General Manager Garth Snow fully seemed to grasp or act upon. In more than one way he came close, only to never enable the team to take that next step. From goaltending to defense, to elite wingers to surround Tavares with – it just never happened. ESPN’s Greg Wyshynski points to what’s left of the Islanders in a post-JT period “The problem [now] is that all of this team building was in service of John Tavares. This was his supporting cast, rather than a Plan B in case he was no longer an Islander. It’s like someone building a Solar System and then the Sun is extinguished – and, yes, this is an absurd escalation of a “Lou is God” parable.” Lou Lamoriello, despite being a Hall of Fame GM, has a daunting task to fill the holes left by Tavares and Garth Snow. We’ve all maybe been putting too much faith into this, which is possible given everything fans have been through. 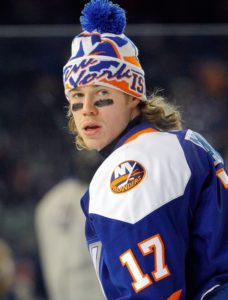 Getty Images
Since July 1st has come and gone, the Islanders do look slightly different – signing former Toronto Maple Leaf Leo Komarov, Tampa Bay Lightning/Flyer Valtteri Filppula and former Penguin Tom Kuhnhackl. That was followed up with signing former Sabres goaltender Robin Lehner to a one year contract and trading for former Islander Matt Martin. Moves that fill some holes defensively and help the horrible Penalty Kill. It also raises questions of the intentions of next season – is it a tank? Will it be a crash and bang type season? Were the Islanders viewed as too soft and they wanted veterans to come in and change perception?

Another point to raise is how the Islanders seem to have two fourth lines now – does it indicate that existing Islanders will be traded? We explore that a bit.

Andy Graziano of WFAN doesn’t seem to think the Islanders have the chips it takes to swing a major trade “Personally, I don’t see them as having a ton of assets to trade with. That will hurt.” he also has a warning for fans “I think fans should prepare for a real tough year ahead until the free agent market turns around.” He cites a little tidbit from Lamoriello as a key point “Lou did preach “patience” when he took over – that will certainly be tested this season.” Oddly enough, this all was said to me prior to a majority of the changes I spoke about earlier – so I am not alone in not knowing what direction this team will take this upcoming season.

Building a team, the right team seems to be a common theme everywhere you look and that’s no different here. The Islanders have no choice now but to surround whats left of their talented players with the RIGHT support. A point that Ryan Paton of SiriusXM NHL Network Radio echos “It’ll be slower [building] with JT gone, but I’m a believer in teams taking their time and getting the right pieces in place no matter how they come about, because there is so much talent in this league.”

Dom, from Lighthouse Hockey thinks that everything has been reset but “options for upgrades aren’t great. Lou and Trotz probably scratch them up to non-tank, but non-playoff territory (although with Komarov and Filppula, maybe the accidental tank is already on, yikes!).” He also continues “Handling Lee and Eberle as pending UFA’s is huge” – Lou cannot let them walk away without gaining something in return, a lesson the entire league learned with Tavares’s departure for sure.

Despite all of the unknowns, Strang thinks fans should hang onto the positives “I think the team has made some huge steps forward in brining in Lamoriello and Trotz, but I don’t know how the Isles can fill the void that Tavares leaves, both on the ice and off, in the years to come.” Mike Carver of The Isles Seat agrees “I think the perception of the team is definitely better now than say 10-15 years ago, they’re getting the arena [Belmont], have a brand new beautiful practice facility, recently brought in Lou and Trotz (guys who’ve won) here.” But he also offered up a warning “Unfortunately, something like this will still make the Isles a punching bag for people like the Canadian Media” – we know nothing will ever change there until we start winning. Winning changes everything.

Wyshynski expands upon Lou Lamoriello due to his experiences with him in the past “Signing Leo Komarov and Valtteri Filppula reminded me of when Lamoriello tried to replace Scott Niedermayer [In New Jersey] with Dan McGillis and whatever was left of Vladimir Malakhov in 2005, like he was pants’d by free agency and didn’t have a backup plan”. He points to some potential trade targets like Jeff Skinner or as he says “in a bit of irony in a draft that produced Tavares, Matt Duchene of the Ottawa Senators” and warns “but this was a team that was on the bubble before their franchise player left. What are they now?” A question we’re still trying to find the right answers for, and may not know until the opening puck drops. A lot can change between today and in three months.

We’ll end on what we do know and it’s a big part of what Mark Parrish thinks will be a positive for this team moving forward “The good thing is that the Isles had no problem scoring goals last year. Barzal, Bailey, Lee – plenty of talent up front to compete. But, they have to address their D zone and goaltending.”

There’s way more to come in Part THREE where I speak in pretty lengthy detail with Mark Parrish on the inner-workings of the locker room and team when you lose an important player and what he feels about the GM and coaching changes. It’s worth the wait.